‘This is the largest Eid Celebrations,  from Sydney to Melbourne, ever held in Australia at the top venues’ Syed Atiq ul Hassan, Director CREF 2014. 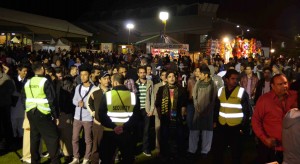 July from Auburn Town Hall, Auburn (Sydney) will end at the mega event of the Eid Festival at Sandown Racecourse, Springvale (Melbourne) on 2 August. The last event of Ramadan Festival was held on Saturday 19 July at Bowman Hall Blacktown (Sydney) and now the preparations are underway for the iconic event of ‘Chand Raat’ (Eid Eve) to be held on Sunday 27th July at Rosehill Gardens, Rosehill (Sydney) and Coburg Town Hall, Coburg (Melbourne) followed by Eid Festival on Tuesday 29 July at Sydney Olympic Park (Sydney) and then on Saturday 2 August at Sandown Racecourse, Springvale (Melbourne).

‘This is the largest Eid Celebrations,  from Sydney to Melbourne, ever held in Australia at the top venues’ Syed Atiq ul Hassan, Director CREF 2014.

‘We Australians are proud to be a multicultural nation where we celebrate festivities of every religion and faith and now the Islamic Community of Australia plays an integral part in our multicultural society by promoting community harmony and delivers the larger Eid festivities than any other western country’ says Syed Atiq ul Hassan, the Director of CREF 2014.

Over 15,000 visitors are expected in Chand Raat this year. There will be 150 exhibitors from small to large businesses, exciting & modern amusements, thrilling rides, delicious food from top restaurants & caterers, and biggest cultural and musical show ever held in CREF which will  include, Pakistani, Indian, Bangladeshi, Arabic, Turkish, Chinese and native Aboriginal- Australian performances.

Free shuttle buses will be running from Parramatta Station to Rosehill Gardens every 20 minutes. Rosehill Train Station is also situated inside Rosehill Gardens and trains to Rosehill run from Granville. Frequent public buses also run from various suburbs to Rosehill. Free parking is available for those who want to come by their own transport.

Live performance from Chand Raat Sydney will be telecasted on the big screen to the Chand Raat in Melbourne at Coburg Town Hall, Coburg (Melbourne). ‘We are making history as this is the first time happening in any Western Country that Chand Raat (Eid Eve) Celebrations are being held in two major cities at the same time and visitors are linked to both events through live coverage’ says Mr. Hassan.

Eid Festival Sydney will be held on Tuesday 29 July at Cathy Freeman Park, Sydney Olympic Park. The event is designed as Eid Day Out during Eid celebrations. This is an open free entry event. There will be plenty of food stalls, amusements, rides, and children games in the event which will start at 10am. Over 20,000 people are expected to attend this event. This grand event will be followed by Eid Festival in Melbourne on Saturday 2 August at Sandown Racecourse, Springvale (Melbourne) where over 15,000 visitors are expected. SBS Radio will be holding a Live Radio show with many other local and international media covering the event. There will be food stalls of Melbourne’s top restaurants, big amusements & rides along with cultural & musical show for the public.

Don’t miss these events and note down the following details: