CANBERRA, Australia – The Australian government is fast-tracking legislation that could clear the way for Pakistani 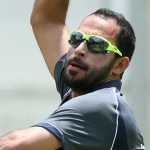 legspinner Fawad Ahmed to play for Australia in the forthcoming Ashes series against England starting July.

The 31-year-old is a permanent resident of Australia after being accepted as a refugee, but needs to be an Australian citizen to become eligible for selection to Australia’s test team.

Immigration Minister Brendan O’Connor introduced an amendment to citizenship law on Thursday that would give him discretion to grant citizenship to residents who have not lived in Australia for the four-year minimum, including Ahmed.

To be eligible, the bill says “an applicant must be engaged in a kind of work of benefit to Australia.”

O’Connor told Parliament his new discretion would apply to “a very small number of people in very exceptional circumstances, where their becoming a citizen would be of benefit to Australia.”

All major parties have already given in-principle support, meaning the bill will be fast-tracked and likely become law by next week.

While the legislation was drafted in consultation with Cricket Australia, other would-be citizens would also be eligible to apply under the loosening of citizenship rules.

Ahmed would have to make an application to the minister and his success is not guaranteed.

Cricket Australia chief selector John Inverarity has left open the possibility that Ahmed could be included in the Ashes squad.

In April, Ahmed took a step closer to being considered for the Australian team after being awarded a full-time contract with Victoria state.

Ahmed played 10 first-class matches in Pakistan before arriving in Australia in 2010 seeking asylum. He was granted permanent residency last year and would normally qualify for Australia in August under International Cricket Council guidelines. Citizenship offers and earlier option for selection under ICC rules.

Australia hasn’t been able to produce a consistent, quality test legbreak bowler since the retirements of Shane Warne and Stuart MacGill.