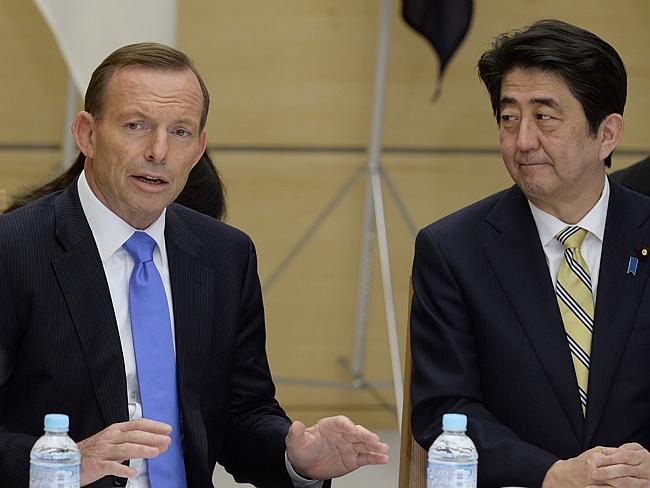 Possible access to Japanese technology and even a so-called “military off-the-shelf” deal to buy the boats is on the agenda during high-level defence talks in Tokyo between Prime Minister Tony Abbott and senior Japanese officials.

Mr Abbott’s talks follow a top-secret mission to Japan in February by the nation’s defence purchasing guru and head of the Defence Materiel Organisation Warren King to open negotiations with Japan’s defence agency for possible access to its Soryu Class submarines.

Defence Minister David Johnston has also met Japanese officials to discuss submarines and senior navy officers have been on board the Japanese boats to examine technologies such as the Swedish-designed air independent propulsion (AIP) system.

The AIP system allows the diesel-electric vessels to remain submerged for long periods of time without the need for fresh air for diesel power-plants.

When asked yesterday what aspects of the Japanese boats might be included in an Australian design, a senior government source replied: “Everything.”

When pressed on whether that included buying the boats off-the-shelf from the Japanese the answer was an emphatic “yes”.

At a submarine conference in Canberra tomorrow Senator Johnston will tell Defence and industry that “all bets are off” when it comes to options for the future Australian submarine fleet.

He will also debunk the myth that Australia needs 12 submarines and will make it plain that the government is not a job-creation agency for local shipbuilders.

That means shipbuilder ASC would need to prove its credentials as a competitive and skilled shipyard.

Japanese officials have visited the ASC shipyard at Port Adelaide, where the navy’s six Collins Class boats were built.

The Japanese vessels cost about $600 million each, or less than half the price of an Australian-made alternative.

The 4200-tonne (submerged) Soryu submarines would be an ideal fit to replace the ageing 3400-tonne Collins boats.

It is understood the Japanese technology could also be used to extend the life of the Collins boats beyond the late 2020s.

Senator Johnston will also urge Defence to get moving quickly so a decision can be taken by March 2015.

He will point out that it took Singapore just 10 months to move from concept to decision for its new submarine.