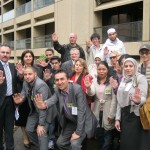 The O’Farrell Government announced that plans to move waste from Hunters Hill to Kemps Creek and Lidcombe will be deferred until the Commonwealth has made a decision on whether this material can be disposed of at its national depository at Muckarty Station in the Northern Territory.

However, there is currently a Federal Court challenge over the Northern Territory site.

“Deferring the decision is more about an election year stunt rather than a serious attempt to sort the problem.  It may be years before the Muckarty issue is resolved –  what we need is a solution now.” said Barbara Perry, Member for Auburn.

“If the Government was really serious about solving this issue once and for all they would withdraw their current application entirely in order to give certainty to our community, particularly those residents who live within 500m of the Lidcombe facility, and who have campaigned tirelessly for the waste to be stored in an appropriate facility”.

“I have also asked the Ministers to take into consideration the advice of the experts who testified at the 2008 inquiry regarding the range of options available for disposal of the waste including Lucas Heights and Olympic Dam.”

“Both would require changing legislation in order to use the facilities but they are viable solutions to this ongoing issue”.

“It is pleasing that the O’Farrell Government has listened to our strong opposition to the storage of the Hunters Hill waste at Lidcombe, and is now admitting that there was “always concern” about the waste”.