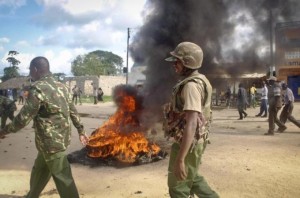 One attack happened at Hindi trading centre in Lamu county, near the scene of attacks in which 65 people were killed last month. And another attack took place in the Gamba area of Tana River county.

“There were two attacks in Lamu and Tana River last night. In Lamu we have nine people dead and in Tana River we have 20. The number could rise,” Mwenda Njoka, a spokesman for the ministry.

Broadcasts from an al-Shabab affiliated radio station said they had claimed responsibility for the Hindi attack, which took place around 15km from Lamu, once a popular tourist resort.

No group has yet claimed responsibility for the attack in Gamba.

A spokesman for Somalia’s al-Shabab armed group had issued a statement late on Saturday claiming that its fighters had carried out an attack in Kenya.

“The attackers came back home safely to their base,” al-Shabab’s military spokesman Abdulaziz Abu Musab said, claiming that at least 10 people had been killed.

Al-Shabab claimed responsibility for last month’s attack at Mpeketoni, saying it was in retaliation for Kenya’s military presence in Somalia as part of the African Union force backing the country’s fragile and internationally-backed government.

Survivors of the attack on the town and a similar attack the following night in a nearby village reported gunmen speaking Somali and carrying al-Shabab flags killed non-Muslims and said their actions were revenge for Kenya’s military presence in Somalia as part of the African Union force fighting the group.

Kenya’s president, Uhuru Kenyatta, however, denied that al-Shabab were involved and instead blamed “local political networks” and said that the victims had been singled out because of their ethnicity.

The attackers appeared to target Mpeketoni because the town is a mainly Christian settlement in the Muslim-majority coastal region, having been settled decades ago by the Kikuyu people, the same tribe as Kenyatta.

Police also arrested alleged separatists from the Mombasa Republican Council, a group that campaigns for independence of the coastal region, as well as the governor of Lamu county, who is an opposition politician.

The unrest in the coastal region has badly dented Kenya’s tourist industry – a key foreign currency earner and massive employer for the country – at one of its traditionally busiest times of the year.

Meanwhile, a Russian tourist was shot in the head on Sunday by robbers trying to steal her camera in the port city of Mombasa.

The woman was touring Fort Jesus, a Unesco World Heritage Site, with two other people they they were accosted by three armed men.