Astronomers have discovered what they say is the most Earth-like planet yet detected, a distant, rocky world that’s similar in size to our planet and exists in the Goldilocks zone where it’s not too hot and not too cold for life. 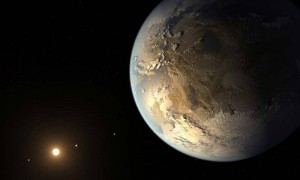 The find, announced Thursday, excited planet hunters who have been scouring the Milky Way galaxy for years for potentially habitable spots outside our solar system.

”This is the best case for a habitable planet yet found. The results are absolutely rock solid,” University of California, Berkeley astronomer Geoff Marcy, who had no role in the discovery, said in an email.

The planet was detected by NASA’s orbiting Kepler telescope, which examines the heavens for subtle changes in brightness that indicate an orbiting planet is crossing in front of a star.

From those changes, scientists can calculate a planet’s size and make certain inferences about its makeup.

The newfound object, dubbed Kepler-186f, circles a red dwarf star 500 light-years from Earth in the constellation Cygnus. A light-year is almost 6 trillion miles.

The planet is about 10 per cent larger than Earth and may very well have liquid water, a key ingredient for life, on its surface, scientists said.

That is because it resides at the outer edge of the habitable temperature zone around its star, the sweet spot where lakes, rivers or oceans may exist without freezing solid or boiling away.

The planet probably basks in an orange-red glow from its star and is most likely cooler than Earth, with an average temperature slightly above freezing, ”similar to dawn or dusk on a spring day,” Marcy said.

The discovery was detailed in Friday’s issue of the journal Science.

Lead researcher Elisa Quintana at NASA’s Ames Research Center said she considers the planet to be more of an ”Earth cousin” than a twin because it circles a star that is smaller and dimmer than our sun.

While Earth revolves around the sun in 365 days, this planet completes an orbit of its star every 130 days.

”You have a birthday every 130 days on this planet,” she said.

Scientists cannot say for certain whether it has an atmosphere, but if it does, it probably contains a lot of carbon dioxide, outside experts said.

”Don’t take off your breathing mask if you ever land there,” said Lisa Kaltenegger, a Harvard and Max Planck Institute astronomer who had no connection to the research.

Despite the differences, ”now we can point to a star and know that there really is a planet very similar to the Earth, at least in size and temperature,” Harvard scientist David Charbonneau, who was not part of the team, said in an email.

Since its launch in 2009, Kepler has confirmed 961 planets, but only a few dozen are in the habitable zone.

Most are giant gas balls like Jupiter and Saturn, and not ideal places for life. Scientists in recent years have also found planets slightly larger than Earth in the Goldilocks zone called ”super Earths,” but it is unclear if they are rocky.

The latest discovery is the closest in size to Earth than any other known world in the habitable region.

Kepler-186f is part of a system of five planets, all of which are roughly Earth’s size. However, the other planets are too close to their star to support life.

Astronomers may never know for certain whether Kepler-186f can sustain life. The planet is too far away even for next-generation space telescopes like NASA’s overbudget James Webb, set for launch in 2018, to study in detail.

Kepler completed its prime mission and was in overtime when one of the wheels that keep its gaze steady failed last year.

NASA has not yet decided whether to keep using the telescope to hunt for planets on a scaled-back basis.