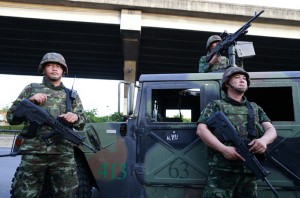 Thailand’s army chief has announced that a military commission that imposed martial law on Tuesday will now take control of the country’s government.

Thursday’s announcement on television came after a second day of negotiations in the capital Bangkok between the army, political groups, senators and members of the election commission failed to resolve the country’s political crisis.

A 10pm – 5am curfew was imposed immediately after the military announced they had seized power.

“It is necessary for the Peace and Order Maintaining Command – which includes army, navy, armed forces and police – to take control of governing the country,” General Prayut Chan-Ocha said, flanked by the heads of the armed forces.

As the announcement was made, hundreds of troops surrounded the venue of the talks from where Suthep Thaugsuban, who has been leading more than six months of anti-government protests, was taken away.

Press reported from Bangkok, said: “They [the army] are in control.

“There has been a very tense state in this country for the last six months.

“The army [now] controls everything in the government. We do not know what is going to happen to the leaders of the Red Shirts and Yellow Shirts.”

The Red Shirts, so-called because of the colour of their outfits, support the government that has been in power while the Yellow Shirts oppose what they call Thaksin Shinawatra’s legacy and influence on Thai politics.

Thaksin, who was removed from power in 2006 in a coup, is the brother of Yingluck, who became prime minister in July 2011 and was removed earlier this month, along with nine cabinet ministers, for violating the country’s constitution.

The dismissal was brought about by a lawsuit filed by anti-government senators who accused Yingluck of nepotism.

Meanwhile, the leader of the Red Shirts said the political group would continue its rally on the outskirts of Bangkok despite the military seizing control of the government and telling all protest groups to disperse.

“Will you fight or will you not fight? We will not go anywhere. Don’t panic because we expected this,” Red Shirt leader Jatuporn Prompan told supporters. “Whatever happens will happen.”

The group had threatened to resist if the army seized power.

In its declaration of martial law on Tuesday, the military had insisted it was not seizing power, but that it was acting to prevent violence and restore stability.

Thailand has experienced 11 coups – excluding the latest – since it became a constitutional monarchy in 1932.

The latest round of unrest started in November, when demonstrators took to the streets to try to force Yingluck to step down.

They accused her of being a proxy for her popular billionaire brother, who now lives in self-imposed exile to avoid a jail sentence on a corruption conviction.