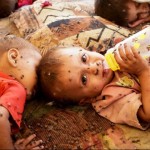 Afghanistan from 1979 to 1989. The simple and illiterate people from the mountains were trained by the forces and secret services of Pakistan and United States. Pakistan’s northern territories were used for military training to the people of Pakistan and Afghanistan (Pashtoon & Afghan) living on the border-regions of both countries and to those thousands of Pakistanis who travelled from different parts of Pakistan to Afghanistan and also to the foreigners who came from different Muslim Countries especially from Arab land to Afghanistan on the name of Jihad. They were educated on the philosophy that it was Jihad (War against infidel in Islam) against the Russian forces. The Pak-US mission succeeded, Soviet Union had to withdraw its forces from Afghanistan. Soviet Union were not only defeated in the battle but fallen into parts, resulted in Muslims uprising in Muslim States of Soviet Union and freed from Soviet Union rule. The leaders of Taliban like Osama Bin Laden and Mullah Umer were treated as heroes of Islam. Osama Bin Laden when returning back to Saudi Arabia received a warm welcome as a hero of Jihad in Afghanistan. Mullah Umer was rewarded by the government in Afghanistan, backed by US and Pakistan from 1996 until the 9/11 (2001) attacks in United States.

During and after that 10 years of war in Afghanistan against the forces of Soviet Union, more than 40,000 Afghan refugees fled to Pakistan and settled in Peshawar to Karachi. Prior to these refugees no one heard in Pakistan about ‘Heroin’ and Kalashnikov, this life-taking drug and brutal weapon were available everywhere in Pakistan. On the other hand, Pakistani ruler, army and secret services (ISI) were celebrating and claiming victory in Jihad against infidels. Then Army Ruler General Zia ul Haque declared the victory as the victory of the Islamic Umma who wanted to make Pakistan a fort of Islam perhaps through these Taliban.

Without going into the details of the relations between Taliban, Al-Qaida with United States in 20 years (1980s to 1990s), twin towers in New York were blasted by terrorists through passenger planes crashing into the buildings by terrorists on 9/11 (2001); yesterday’s Jihadist for United States were now terrorists. US-led Western forces attacked Afghanistan claiming to hunt Osama Bin Laden and the members of his Al-Qaida network as being terrorists.

Roles and rules of the game changed, mission changed, and Pakistan was asked to support United States in the war against Taliban and Al-Qaida on the name of ‘War against Terrorism’. Pakistani ruling and defense forces, truthfully or untruthfully, supported the US-led war in Afghanistan.

Today, more terrorist attacks and killings are happening in Pakistan than in Afghanistan. Pakistan became the most dangerous country to live in. The Pakistan’s tourism industry collapsed, economy fallen, trade decreased, international cricket gone, and the entire country is just struggling to survive.

Today, looking in the credits of Pakistan’s foreign strategic policy;  over 40,000 killings of innocent people of Pakistan, over 8,000 loss of army personnel, couple of thousands Policemen and border security forces killed, many high profile intellectuals, religious scholars murdered in target killings, and the entire country is in the grip of terrorists, and anti-Pakistan internal and external elements. From the Prime Minister to the Army Chief, they are unable to take a firm and straight decision against these terrorists. On the name of dialogue only time gaining tactics are being used in order to get dictation from Saudi Arabia and United States. And Pakistan finds itself alone to convince the world on its genuine grievances.
As a matter of fact, in the last 30 years, Taliban have given a new meaning to the implementation of Islam in the State. They want to implement their version of Islam. These tribal people, who have a history of being paid-killers, treat Islam like a system of tribalism and a tool to takeover Pakistan. They killed people in a barbaric manner. For them, everyone is enemy of Islam who don’t follow their version of Islam. But, who to blame, these people were given all sort of opportunity to establish themselves by Pakistani and western forces. Their fanatic and barbaric thoughts have now spread all over Pakistan. There are many fanatic groups, religious parties and some political parties as well who keep sympathies for Taliban and still treat them as Mujahedeen. These groups are waiting for Taliban to attack the cities and town of Pakistan and declare war in Pakistan so that they will support them. Even except one or two political parties, all are opted to become silent on condemning Taliban.

Therefore, the situation is highly dangerous for the existence of Pakistan. Taliban are now a fanatic philosophy and thoughts on the name of Islam. If Pakistan and the people of Pakistan have to defeat Taliban, they have to kill that mind-set and barbaric philosophy they are carrying.

Also, these Taliban are not alone, they are fully supported by international or regional powers who want disintegration of Pakistan. How these Taliban are getting dangerous weapons regularly and who is continuously providing it to them. The Pakistani rulers are unable to tell people the truth; nevertheless it is simple to understand that the anti-Pakistan powers are behind Taliban.

The civilian government of Nawaz Sharif is claiming that the government and the military are on the same page and have no differences in dealing with Taliban. Obviously, they are on the same page as both are incapable to take firm decision. The fact of the matter is that these rulers are the puppets of US, UK and Saudi Arabia. And the reason is that they brought the country economically so dependent on these countries. In the last 6 years of so-called democratic system, these governments have borrowed billions of dollars loans from international monetary agencies who are controlled run by US and Western powers. These corrupt rulers made Pakistan slaves in the hands of international money lenders.

Anyway, this appalling situation of Pakistan is the result of decades’ long wrong internal and external polices. Only that country can have an independent and powerful foreign policy in the best interest of its people & state who can maintain an independent economic and political policy.

Evidently, all the political and religious parties of Pakistan have given the country and the people nothing except problems and divisions. The so-called top political leaders of Pakistan are the richest families of the world and business tycoons. They are also the enemies of Pakistan. The Pakistan nation should stand up not only against the Taliban but the entire corrupt political culture and system of Pakistan. This can only be done by force; therefore, Pakistani army is the only institute who can take the challenge to do an operation clean-up in the entire country with extreme power. However, Pakistan cannot afford another Martial Law like in the past targeting a particular party or persons in government and then enjoy power sharing with the same corrupt so-called politicians. Pakistan needs a military dictator who can eradicate the corrupt and obsolete system of Pakistan, clean Pakistan from all the enemies whether Taliban, religious extremists or corrupt politicians. All sorts of so-called political activities should be banned for some time. All sectarian religious groups and parties should be banned. Islam doesn’t promote sectarianism and divisions. All sort of religious and political rallies and demonstration on roads must be banned except of those in celebrations of the national days of Pakistan and in celebration of the Prophet Muhammad (PBUH) or for any national cause.

The Justice System must be restructured. All corrupt judges must be sacked from the system. Law enforcement agencies must also be reorganized according to the modern concept of administration. All government officers must be appointed on merits, and all sorts of quota must be abolished. All educational institutes must be freed from any political activities or gun culture. It is a shame to see how gun-culture has been promoted by political leaders and their parties, landlords, tribal leaders and even the religious parties. All sort of weapons with the public must be banned, and all licenses should be cancelled.

Pakistan and its nation have enormous potential. The country has massive natural resources, ocean, rivers, mountain, desert and huge farming land. The people are talented, youth are in majority. The country is full of different sorts of professionals. The defense forces are high-class military with modern nuclear weapons. The only thing Pakistan and its nation need a stable, fair, corruption free system of governance.