With the growing use of technology, young Arab comedians are utilising satire as an agent of change online. 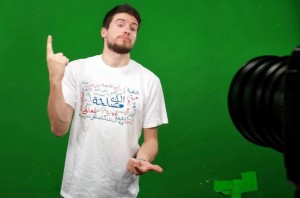 “Trust me my fellow subjects, dictators have feelings too. When Bouazizi lit himself on fire in 2011, I shed a tear. I did. But not for the poor guy himself but for the litre of petrol that was lost,” he said, mockingly.

Of course, Sakr was commenting in jest, while poking fun at Arab dictators by using black comedy to introduce a group of fellow “YouTubers” from across the Middle East and North Africa.

One of them, unofficially dubbed the “Minister of Youth” in Jordan, is Nikolas Khoury.

Using a green screen, a single camera and a script, Khoury usually tackles every day issues faced by the youth; from love in the Middle East, to marriage and even recent cases pertaining to Jordan’s controversial rape law. Khouryuploads his monologues onto the popular social media platform YouTube.

“My videos talk about social and political issues. I usually hate labelling what I talk about as political,” Khoury said.

“You have to remember that when you talk about the current affairs of your country, it is your national duty and not just your right,” he added.

Egypt’s Joe Hussen racks up nearly a million views per video for his show, aptly named JoeTube. Hussen felt the vacuum in the media space after the uprising that began in January 2011, and had the idea that humour could be used as a tool to get to his fellow citizens.

“Egyptians as a people are funny in nature with a good sense of humour. We saw that there was an alternative space for us, the youth, to take up online, as opposed to the state-owned media,” Hussen said.

“Young people are the fastest growing segment of the population in countries where democratisation and socio-political reform are most needed,” Sahar Khamis, assistant professor of communication at the University of Maryland. “This is certainly applicable in the Arab world, where 70 percent of the population is made up of young people under the age of 30.”

Khamis adds that while most of these young people are educated, or have the aspiration to be educated, they are more importantly politically engaged and technologically savvy. This helps in getting their views out to as many people as possible.

“This phenomenon is most likely to continue in the coming years and to expand and rapidly grow, as the figures of internet users, in general, and young social media users in particular, continue to soar and multiply quickly in many Arab countries – especially after the ‘Arab Awakening’ in 2011,” Khamis said.

Perhaps reflecting on Khamis’ analysis is a recent survey, conducted by Northwestern University in Qatar, on media use in the Middle East and North Africa. The research consisted of interviews with respondents from Qatar, Bahrain, Egypt, Jordan, Saudi Arabia, Lebanon, Tunisia and the UAE. It found that of those in the age group 18-34, nearly 48 percent felt that people should be free to criticise their governments on the internet. Fifty-one percent meanwhile, felt that by using the internet, people can have a better understanding of the nature of politics.

Another group taking advantage of the growing market for political satire can be found in the Gulf state of Kuwait. Fed up with the state-owned television channels that only publish government-approved content, the group started its own YouTube channel – performing comedic sketches for the purpose of shocking Kuwaiti society, some of the topics covered are considered taboo, such as paedophilia.

Calling themselves Sheno Ya3ni TV, loosely translated in English as “so what”, their channel’s name reflects the group’s focus: They are less concerned with the messages in each sketch, caring more for the idea of being able to practise their freedom of speech.

“I was once stopped by a group of people while walking through the mall and was told that my material was too graphic and negatively influences the younger generation,” Sheno Ya3ni  lead actor Ahmad al-Shammari said. “I responded by saying that if they feel uncomfortable, then simply don’t watch. You have all the government channels to choose from.”

Despite their efforts to push for more freedom of expression, posting socio-political views comes with hard lines that many, especially governments, may not like them to cross.

One of the latest cases to make the headlines is Bassem Youssef, considered by many to be Egypt’s answer to the popular US comedy show host Jon Stewart, announcing the cancellation of his popular showEl Barnameg, “The Programme”. Youssef claimed that outside pressures and fears for his and his family’s safety led to his decision. Like Khoury and Hussen, Youssef started his political satire career through YouTube, before being given his own television show.

But according to Khamis, Youssef was used as a convenient political tool by Egypt’s military-backed government that superseded Mohamed Morsi’s administration following the July 2013 coup.

“He was unfortunately manipulated and used as a tool to attack the Muslim Brotherhood and [former] President Morsi, by constantly, and many times aggressively, making fun of them on his show. Once President Morsi was deposed from office, it was time to get rid of [Youssef],” Khamis said. This was done to “protect the new order in the country from the danger of his exceptionally popular and effective political satire”, she added.

From Kuwait Sheno Ya3ni say that their job as comedians is to redraw an unfixed red line until their countrymen feel completely uneasy. “When we started, we did it slowly and gradually until people started saying ‘enough’. When the people are pushed to their maximum limit, that is when we will draw that line,” al-Shammari said.

Perhaps more conservative in their approach is the Qatari team of Klmt Ras. The relatively new show discusses local social issues, but stays away from talking politics. The show’s director, Jassim al-Ali, says that this is because their main task is to combat negative headlines and stereotypes placed on Qatar due to ongoing controversies surrounding the country’s status as host of the 2022 FIFA World Cup.

“When we saw all of the foreign media negatively writing about Qatar, we sat down and said that we have to counter it with our own show, using Qatari voices who know the country much better,”

The political climate and the degrees of tolerance are unique to each country, according to Khamis.

“The red line is never fixed, rigid or set in stone. It always stretches and shrinks … All of these factors combined contribute to setting the boundaries of freedom of expression in a given country, which could never be perceived as a ‘one size fits all’,” she said.

On considering whether or not he could identify himself as a journalist, Khoury argues that any person who has a message and relays that through whatever medium they choose, should be considered as one. “The media has so many different segments: from the writer, to the broadcaster and even the cartoonist,” he told Al Jazeera.

Egypt’s new president, Abdel Fattah el-Sisi, met with local newspaper editors earlier in May and told them that his administration would not tolerate full press freedom, adding that Egypt needed to “balance between the practise and the freedoms and national security”.

“The biggest disappointment is that those who speak out and talk about corruption get the label of ‘traitors’ but the one who stays quiet gets praised as a patriot,” Khoury said. “That mindset has to change.”