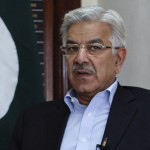 Chaudhry Sarfraz Anjum Kahlon – political advisor to Musharraf – alleged that Asif had questioned the “bravery” of the former president and ridiculed former chief of army staff. Following the remarks, a statement by APML described the defence minister’s remarks as “unpatriotic, disturbing and in violation of his ministerial responsibilities.”

“Asif should immediately issue an apology to the citizens of Pakistan and also submit his resignation,” Kahlon demanded.

“Asif’s position had become untenable and his presence as defence minister was detrimental to the morale of the Armed Forces,” he added.

The political advisor to the former president warned that “opponents of Musharraf will not succeed in their malicious designs and those pursuing the path of personal revenge were not acting in the best interests of the country.”

He added that “Prime Minister Nawaz Sharif’s personal vendetta against Musharraf was creating severe friction between state institutions which could lead to unpredictable consequences.”