More than 100 pro-democracy students have stormed the government headquarters in Hong Kong and scuffled with police in protest against the Chinese government’s tightening grip on the former British colony. 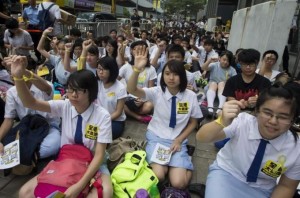 Police used pepper spray on protesters who on Friday forced their way through a gate and scaled high fences surrounding the compound to oppose Beijing’s decision to rule out free elections for the city’s leader in 2017.

In the early hours of Saturday, about 1,000 students remained outside the government headquarters.

Protesters linked arms as police surrounded them with metal barricades with some chanting “civil disobedience” and “free the people”.

At least four people were carried off on stretchers with slight injuries. The scene marked the biggest escalation in street protests since Beijing’s decision in late August.

Earlier on Friday, hundreds of school children, some barely in their teens and dressed in school uniforms, assembled in a park close to government headquarters sporting yellow ribbons and stickers saying “smash Chinese Communist Party dictatorship”.

About 200 students also camped outside the home of chief executive Leung Chun-ying on Thursday night after he ignored their 48-hour ultimatum to meet them to discuss the special administrative region’s democratic future as tensions escalate.

After work on Friday evening, thousands more people rallied to the side of the 1,500 or so secondary pupils who had skipped classes, bringing the week-long class boycott to a close.