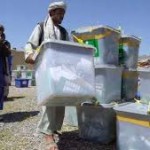 multiethnic population of Afghanistan. The Afghan election system follows that of the French. There are a total of 11 candidates in the run and it is not possible for any one of these aspirants to get more than 50 per cent of total votes. This will mean the two candidates getting the highest votes will be pitted against each other in the second round. The process of declaring an ultimate winner can take a few months if one takes into consideration the disputes erupting as a result of ballot complaints. The second round of two leading contestants will take minimum six weeks from the date of the first, or even more.

The question that is important here is whether or not the Uzbek, Pashtun, Tajik, Hazara, Nuristani, Pamiri, Aimak and others will accept the result or will Afghanistan descend into civil war. The latter is most likely. The apparent stronger candidate Abdullah Abdullah, previously Karzai’s foreign minister, resigned and in 2009 had emerged as a serious contender to the Afghan President post. He garnered enough votes to make it to the second round. However, he does not command Pashtun support in Afghanistan. Hence, any opposing contender of his, assuming there is a second round will walk away with the Pashtun votes for the simple reason that Abdullah will not be acceptable to them.

The Afghan National Security Forces are not strong enough to counter a full blown insurgency. Although in most areas, the local forces are responsible for maintaining law and order, the international forces do patrol to support them in certain areas upon request. Let us not forget a doggedly continuing insurgency continues in the eastern and southern part of Afghanistan as I write.

Afghanistan is going to face shortage of investment, security back-up support, collapse on the front of transportation and reconstruction upon the international forces leaving its land. There will be a dire need to focus on long term sustainable programmes based on strengthening the economy. This can only follow a peaceful transition of power, or at least near peaceful.

Afghanistan will no longer be recipient of heavy international aid to restructure its economy. It needs to develop production sectors, looking for markets to sell their wares inside and outside Afghanistan. But, as Pakistan’s example teaches us, economic stability relies on secure environment. Killings, insurgency and related security instability can effectively make the capital take flight outside the borders.

The Afghan ground will be fertile for Taliban with the international forces out of the picture. Russia, Iran and India will support the anti-Taliban forces;India’s investment in Afghanistan is a whooping US $2 billion in development aid and has a huge stake there. In 2011 both countries had signed an agreement to the effect that India will train and equip the Afghan Security Forces. Afghanistan’s importance for India is further emphasized by Rupakjyoti Borah and Panditdeendayal in their article. “Afghanistan is important for India’s energy security. Afghanistan is India’s gateway to energy-rich Central Asia – the US$7.6 billion Turkmenistan-Afghanistan-Pakistan-India pipeline is scheduled to start bringing natural gas from Turkmenistan to India by 2017… India has a big economic stake in Afghanistan. It owns the mining rights to three of the four blocks of the Hajigak iron ore deposits, west of the capital city of Kabul, and has funded the construction of the 218 kilometer Zaranj-Delaram road in Afghanistan, which gives landlocked Afghanistan access to the sea via Iran. India uses the Iranian port of Chabahar to ferry supplies to Afghanistan because Pakistan refuses to give India access overland to Afghanistan.” (Published August 6, 2013)

Iran on the other hand is using media in Afghanistan with an aim to gain stronger influence. “Nearly a third of Afghanistan’s media is backed by Iran, either financially or through providing content, Afghan officials and media groups say. Iran spends $100 million a year in Afghanistan, much of it on the media, civil society projects and religious schools, says Daud Moradian, a former foreign ministry advisor who now teaches at the American University in Kabul.” (Reuters, May 24, 2012)

On the Russian front, Karzai offered unequivocal support to Russia in it annexation of Crimea. Russia is viewed as a natural ally to Afghanistan in the changing geopolitical scenario. Russia has not forgotten Pakistan’s role in supporting USA vis-à-vis Russia in the 1980s. China has supported Pakistan principally, whereas Russia has done the same for India. A tricky situation by any given standard.

Pakistan is in a noose. On the one hand it needs to deal with militant outfits on its soil. There are no two ways to go about it. On the other hand, in the evolving situation next door, with a next to impossible border to manage between the two countries, there is a strong chance of the Afghan soil being used to organize attacks within Pakistan by the militants rather than the other way round. A report by Stratfor states, “Pakistan has hoped a negotiated settlement between the United States and the Afghan Taliban ending the insurgency in Afghanistan would eventually help Islamabad deal with militants on Pakistani side of the border.” (April 15, 2013)

One interesting point the report raises is, “If the Afghan Taliban are not part of a broad-based coalition government in Kabul, Pakistan will face serious difficulties in getting a handle on its own Taliban rebels. This explains why Pakistan has been pushing for a balance of power between the Taliban and anti-Taliban forces.” However, with Taliban not having participated in the 2014 elections, such participation is not possible. Being a militant group and being a politically organized party are two different things altogether.

So what does Pakistan do? It has landed itself in a situation where they are damned if they do and damned if they don’t. There is no perceived ally with which Pakistan can associate itself or rely upon to counter this situation. Allying itself with Saudi Arabia in this volatile situation may well lead to more complications for obvious reasons. The argument between the ‘good’ and the ‘bad’ Taliban will not hold. Let us be clear that the standing between Pakistan and Taliban (earlier called the Mujahideen) is a different and difficult one than when created to counter Russian influence in Afghanistan. Policy making in Pakistan is divided owing to a mix of extreme right, right, moderate and left legislators.

One sincerely hopes it does not drag down Pakistan with it.

The writer is a lawyer, academic and political analyst. She has authored a book titled A Comparative Analysis of Media & Media Laws in Pakistan. Her email is: yasmeenali62@gmail.com and tweets at @yasmeen_9