Kabul: The Chair of the Afghan High Peace Council Salahuddin Rabbani said that the Council is ready for direct peace 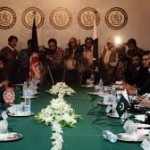 talks with the Taliban. Salahuddin Rabbani said that further consultations are going on with the political parties, civil societies and women to chalk out a strategy for the talks.

Speaking at a gathering held for evaluating the progress made and challenges in the peace process of Afghanistan, Rabbani seemed optimistic regarding direct peace talks with the Taliban.

“Efforts are going on to enter into direct peace talks with the Taliban. This requires absolute readiness from the negotiator’s side, global experiences have shown that at the beginning of every peace talk direct pressure is imposed to have an upper hand, therefore we must be ready with an effective strategy to support the peace process,” he said.

He also warned about the efforts of some foreign circles to disrupt peace talks and bring insecurity within the country.

“Many activities carried out by specific groups from abroad are aimed at disrupting peace and security in the country. Efforts are being made to prevent such elements from causing more trouble,” Salahuddin Rabbani said.

Meanwhile, the Head of the High Peace Council Secretariat has asked from other Provincial Heads not to use elections as a political instrument to fulfill their selfish motives.

Head of the High Peace Council Secretariat Masoom Stanikzai said, “Our Provincial Peace Committees should not be used as a political instrument. They should work towards finding a way to bring peace within the country and not be a reason to divide people.”

The High Peace Council appreciated the work done by some of its Committees in bringing the armed opposition groups to the negotiation table and gaining the people’s trust.

The Council said that next week discussions will start with the Provincial Governors for conducting the peace talks. This development happened after the Afghan President Hamid Karzai talked to the US Secretary of State John F. Kerry on Sunday regarding peace process.

Speaking over phone, President Karzai told John Kerry that the peace process should not be a victim of foreign plots. Karzai’s office said that some countries are trying to control the peace talks to achieve their goals.

Early this week, a senior delegation of the Taliban was invited by Iran to negotiate with the Iranian officials. The delegation was led by Sayed Taib Agha and Mohammad Ullah Nomanee, the Taliban representatives in Qatar and Shamsuddin Pahlawan respectively. The former Taliban Governor of the Maidan Wardak province was also among the delegation.

The Taliban’s Spokesman Qari Yousef Ahmadi had confirmed that a senior delegation was invited by Iran to negotiate with the Iranian officials.—NNI