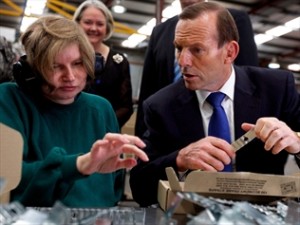 Labor has urged the coalition government to stick to the agreement reached with the states and territories in 2013 to fund launch sites before fully rolling out a national disability insurance scheme by July 2019.

Mr Abbott said before the election that the coalition and Labor were on a “unity ticket” on the NDIS.

However, since the election the coalition has stopped talking about “launch” sites and instead started calling them “trial” sites.

In his first major decision on the NDIS, Mr Abbott visited Perth on Monday to announce the federal government would contribute $80 million and the WA government $50 million towards trial sites for disability services covering about 8400 people.

One trial would use WA’s state model known as My Way in the Lower South West region and the other would be run under the commonwealth’s national disability insurance scheme in the Perth Hills and the merits of each would be compared over two years.

WA Premier Colin Barnett, whose government prefers a system delivered by contracted not-for-profit organisations, said the trial would show how “devolved” an NDIS could be.

Mr Abbott said WA’s decision to sign up meant there was now a “national network of trials”, from which lessons could be learned.

Asked whether the national scheme promised by Labor would be delayed, Mr Abbott said his government was committed to “delivering a sustainable and affordable national disability insurance scheme”.

“One of the problems with the former government is they were rushing it – they were more concerned with getting a political monument rather than getting it right.”

Opposition families spokeswoman Jenny Macklin said the government had taken its time in signing up WA, given that the agreement was struck by Labor in August last year.

“Tony Abbott must not shirk his responsibility to deliver the NDIS in full and on time, as promised,” Ms Macklin said.

Opposition Leader Bill Shorten, who was also in Perth campaigning ahead of this Saturday’s Senate election re-run, said the Abbott government had been talking down the NDIS as a truly national scheme since the election.

“I am not going to join the Liberal chorus attacking the national disability insurance scheme,” Mr Shorten said.

“The NDIS is about empowering the lives of hundreds of thousands of Australians with disabilities and their carers who have been effectively exiled in their own country.”

He said funding for the scheme’s rollout was “on the never-never”.