ABOUT 500 dolphins have been caught in the Pilbara trawl fishery in the past 10 years, West Australian scientists say. 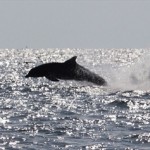 Murdoch University PhD candidate Simon Allen and colleagues from the Cetacean Research Unit have made the claims based on independent observer data, which shows methods to reduce dolphin bycatch are not working.

“Independent observers reported bycatch rates of about 50 dolphins per year, which is double the number reported by the skippers of these vessels,” Mr Allen said.

Under-reporting was not unusual around the world, especially where marine mammal capture was illegal, he said.

“Fishers are concentrating on the job at hand and may not see a dead dolphin fall out of the net on winch up.”

A report by the WA Fisheries Department detailed similar findings, but instead suggested self-reporting mechanisms in place were accurate and the impact posed negligible risk, Mr Allen said.

The scientists have also called for a reinstatement of independent observers and in-net video collection to accurately measure bycatch.

“The next step is to calculate the acceptable levels of human-caused dolphin mortality, which requires an estimate of the dolphin population size in the region,” Mr Allen said.

“If the ongoing bycatch exceeds that threshold, switching to alternative, less destructive fishing methods, like trap or line fishing, should be considered.”