Foreign minister Walid al-Moallem delivers provocative speech at start of Montreux talks. The Syrian government has accused the west of backing terrorism in Syria in a defiant opening address at the start of long-awaited talks in the Swiss resort of Montreux. In provocatively lengthy speech, Syria’s foreign minister, Walid al-Moallem, said: “The west claims to fight terrorism, but it secretly feeds 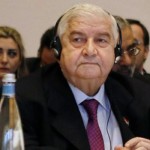 He urged the west to stop “pouring arms” into Syria, warning that if it failed to do so the near three-year conflict in Syria would spread to neighbouring countries. “We have come [to the talks] to prevent the collapse of the Middle East,” Moallem said. He also accused the Syrian opposition of being traitors. The belligerent tone of the speech underlined how difficult it will to reach a diplomatic breakthrough at the talks.

Moallem repeatedly ignored requests to cut short his speech by the UN secretary general, Ban Ki-moon, who chaired the session. “I have the right to give the Syrian version here,” he told Ban after one intervention. Ban had urged speakers to speak for around seven minutes. Moallem’s address lasted over half an hour. Moallem also defied Ban’s request for speakers to refrain from making accusations against participants at the conference. And he signalled that Syria would resist attempts to set up a transitional government, as set out in the Geneva I communique of 2012.

Addressing his US counterpart, John Kerry, Moallem said: “No one, Mr Kerry, has the right to withdraw legitimacy of the [Syrian] president other than the Syrians themselves.” In his opening remarks, Kerry said Syria’s president, Bashar al-Assad, could have no place in a transitional government because he had lost legitimacy.

“We see only one option: negotiating a transition government born by mutual consent,” Kerry said. “That means that Bashar al-Assad will not be part of that transition government. There is no way, no way possible, that a man who has led a brutal response to his own people can regain legitimacy to govern.”

The Syrian opposition leader, Ahmad Jarba, called on the Syrian government immediately to sign up to the Geneva I agreement, which includes the establishment of transitional government. He also said new photographic evidence, published by the Guardian, of the torture of detainees allegedly committed by Syrian government forces, was similar to crimes by the Nazis. “The pictures of torture are unprecedented except in the Nazi camps during the second world war,” he told the talks. Syrian officials could face war crimes charges after a military police photographer defected and provided evidence showing the systematic killing of 11,000 detainees, according to three lawyers who examined the files.