At least 27 people have been killed in a shelling carried out by militants in the northern Syrian city of Aleppo.

Some 80 more people were also injured on Monday after the militants fired more than 50 shells into al-Jamiliyah, al-Meridian and Sa’adallah al-Jabiri neighborhoods in Aleppo. 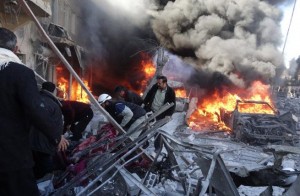 The recent attacks brought the number of the people who have been killed in Aleppo over the past three days to 50.

On Saturday, 20 people were killed after militants fired 40 mortar shells on several neighborhoods of the flashpoint city.

According to some sources over 150,000 people have been killed since the Syrian crisis erupted in March 2011.

Militant groups have stepped up their attacks against Syrians in several cities and towns as the country prepares for a presidential election on June 3.

President Bashar al Assad is competing in the presidential race. He will face Maher Abdel Hafiz Hajjar, a lawmaker from Aleppo, as well as Hassan Abdallah al-Nuri, a legislator from Damascus, in the forthcoming presidential race.