On 29 July 2013 the 25th year of the signing of the Indo-Lanka Peace Accord will be marked. What did it achieve and 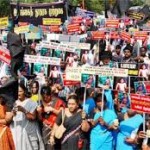 what it did not is as important as deciding where do we in Sri Lanka want to take the Accord and the 13th amendment both imported and forced upon Sri Lanka.  Moreover, the chief architect of the Accord was assassinated by the LTTE which his mother trained and equipped while his counterpart in Sri Lanka is also no more. With both dead, the others tagging on to the Accord have no real basis to be demanding its continuance because none of what was promised in the Accord ever happened. If the Indo-Lanka Accord, the letters exchanged between PM Rajiv and President Jayewardene as well as the 13th amendment were ALL DRAFTED by the South Block of the Indian External Affairs Ministry we need to very clearly tell India that we no longer wish to carry its burden any more. Moreover, to make Sri Lanka sign an Accord and change its Constitution drafted by India under duress is itself is a violation of Sri Lanka’s sovereignty. 25 years on the issue is of security and both India and Sri Lanka must look at things from a security angle.

The number of pacts signed between politicians are many but how many of these have actually benefitted the masses is a question never answered. Without a doubt the Indo-Lanka Peace Accord and the subsequent 13th amendment to Sri Lanka’s Constitution on 14 November 1987 and with it the Provincial Councils Act No 42 of 1987 to establish provincial councils will go down as one such unworkable agreement of little or no benefit to the masses. Ironically, India politically offered a Peace Accord and a new administrative system whilst training and arming and financially supporting the LTTE – proof is found very clearly in the Jain Commission report and Indian Government went to great lengths to omit references to India training and arming LTTE in the Report.

The I3th amendment is only a POLITICAL TOY and nothing else. NE Province was merged in September 1988 and elections held in December 1988 and within 2 years the elected Chief Minister Varatharaja Perumal declared a unilateral declaration of independence forcing President Premadasa to dissolve the NE Province. Incidentally, Dayan J who was a Minister in Perumal’s NE provincial government is now paranoid that India would invade Sri Lanka and that the country should be cowards and implement the 13th amendment. This same officer secretly changed clauses to a State document presented in Geneva which shows his untrustworthiness to be entrusted with national affairs. The NE merger was declared illegal by the Supreme Court of Sri Lanka in 2006. The province was formally demerged into the Northern and Eastern provinces on 1 January 2007. It was the JVP that filed the case that led to the demerger and the nation is ever grateful for them just as the JVP now unites with nationalist forces to demand the repeal of the 13th amendment.

Former IPKF Commander General A S Kalkat says “When we drafted the 13th Amendment, most of the Sri Lankan Tamil leaders – TULF leaders as well as militant leaders – wanted Jaffna to be the capital of North and East, but we insisted that Trincomalee should be the capital because of strategic importance of the sea port to India,”. This shows that the entire agreement was created for India and for India’s interest only. This is something the Tamil people needs to take into consideration. This also brings up the issue of how many Sri Lankan Tamils think India has a legitimate right to interfere in a sovereign nation. Much of the issues that have arisen, come from the fact that we are unable to clearly articulate to India that we are a sovereign nation and India has no right to be meddling in our internal affairs. Unless the Government directly takes this issue and addresses it we are likely to face many more situations where Tamil parties continuously run to Delhi to be instructed on what to demand from Sri Lanka’s cabinet. This is a very unwholesome situation for both countries for it gives rise to unnecessary tension and allows foreign players to enter and make matters worse for both nations. It is not just the TNA – the UNP too cannot think for itself and has to always run to the West for instructions. In this manner can the people ever place trust in such political parties?

This is the exact scenario that is taking place and India’s nationalists would well do to read the likely repercussions of Hillary making a special visit to Tamil Nadu for talks with a State Chief Minister which is no different to the US Ambassador striking chords with the Muslims of Eastern Sri Lanka. The lies the US administration tells is revealed only too well for Americans now find that their Government preaching freedom to all and sundry has been snooping in on everything they do and say – so much for freedom of expression!

None of the Indo-Lanka Peace Accord/13a/PC supporters can forget that Sri Lanka had to sign the Pact under duress, with emergency declared, media forbidden and with Sri Lankan Ministers virtually bribed having to give undated resignation signatures on blank paper. The only man with guts amongst them was Gamini Jayasuriya who resigned and R Premadasa who boycotted the proceedings. Many of the clauses India promised to uphold never even took place one of which is clause 2.16 a) promising not to allow Indian territory to be used for activities prejudicial to the unity, integrity and security of Sri Lanka – India cannot deny that Tamil Nadu was and continues to be a hub for anti-SL activities.

When India continues to use the slogan that its interest is primarily on the security threat to India, then the fact that India is under US surveillance would show that the hype of calling India a strategic partner is nothing but a sham and India would well do to fear being called a friend of the US rather than feel obliged about the honor.

If India wishes to trust in the TNA politicians who are chameleons and change with the weather, India is likely to fall into dire straits sooner than we thought. TNA have never represented the interests of the Tamil people – they have only represented an elite lot of Jaffna Tamils who never had anything to fuss about given that the 30 year conflict never affected them. Did the TNA give even a packet of rice to any of the refugees or demand the LTTE not to kidnap Tamil children and turn them into child soldiers? Instead what did the TNA do – they openly declared that the Tamil people were represented by the LTTE thus putting all Tamils into the same basket as the LTTE.

Apart from the fact that the Indo-Lanka Accord the 13th amendment and the PC system do not have the mandate of the people, the manner in which India ties the North East as “tamil speaking homeland” draws our attention to the dangers of “ethnic-based federalism” this has failed in all the countries the liberalists have experimented and there is no reason why we should accept it in Sri Lanka when over 2/3 Tamil population live outside of the North.

We do not expect the Tamil people to recall any of this or decide to punish the TNA by not voting for them because we know that the Tamil people will vote for the TNA. Nevertheless, we cannot allow the North to be bartered away by politicians who have been all the while attempting to divide the country and the fact that they take orders from foreign players does not rule out that India will not be victim for the anger that South India has against the North is nothing that needs to be continuously mentioned. In fact if at all, India should be concerned about placing its trust in the TNA given that it has held numerous meetings in the West with officials and it is everyone’s guess what is likely to have been exchanged between them that would place India in a compromising situation.

Therefore, if Sri Lanka’s nationalists have now emerged to emphatically declare to the Government of Sri Lanka that the curse of the 13th amendment should be repealed altogether, India should be wise to factor in some of the arguments that have been meticulously presented which are valid enough for India to realize that the 13th amendment is more of a risk to India too. Given the manner India’s current leadership bends all over to the onslaughts coming from Tamil Nadu simply because of the vote factor, the sovereignty of India should become all the more reason for India to agree to allow Sri Lanka to repeal the 13th amendment and not oppose it.

Many a time India has been warned by Sri Lanka that the West is out to balkanize India and Tamil Nadu is targeted to be made into a Christian satellite state combining Sri Lanka’s North. A good look at all the supporters and where their affinity lies would reveal in no uncertain terms the validity of this conclusion. Yet, if India were to rely on its Congress Chairperson to call the shots, India is doomed.

A careful study of the real entities that helped LTTE thrive and their links, the people using organizations that were funded to support separatism and promote devolution and federalism as a quick stop or interim arrangement will reveal the exact dangers in store for both India and Sri Lanka.

Presently other than the TNA the opposition to the repealing of the 13th amendment is coming from the Catholic bishops, the Communist Party, the Friday Forum, the NGO peaceniks and the Muslim Congress – though taken together they represent a miniscule number their influence is generated by the financial and international backing they have to exert pressure on the Government. From the manner the supporters of 13th amendment articulate their argument to continue the 13th amendment we can safely say we know where they are heading.

Yet, in reality how many of these actually voted for President Rajapakse? It is therefore the voters wishes that President now needs to take into consideration for he is a politician and for politicians numbers matter more than anything. Additionally, there is the Jihad factor that even India needs to be alert to. We had Vaddukoddai being the basis for the armed struggle so we are not naïve to brush aside the Muslims Oluvil Declaration for autonomy. All these place the majority on alert mode and demands that politicians look at the need of the country before placing their personal needs first.

As for any other takers for 13th amendment it is a good time for us the voter to know from those we voted into parliament what their stand is on the 13th amendment – a simple yes/no in favor or not would do without confusing matters like some ministers are talented at doing.

Therefore, the 13th amendment has served its time and needs to be laid to rest never to rise and India is well advised to get down from its obnoxious superior pedestal to see why India should not oppose the repealing of the 13th amendment. Dangers for Sri Lanka spells more dangers for India.