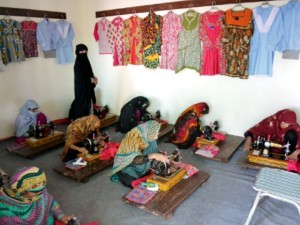 LAHORE – Pakistani home-based women workers have threatened to stage a sit-in outside the Punjab Assembly if the provincial government does not pass the draft Home Based Workers Bill (HBWs) bill within a month. The threat was made at a one-day national convention of the HBWs organized by the Labour Education Foundation in Lahore. More than 800 HBWs from across the country attended the conference which marked the home-based workers day observed across South Asia on Oct 20.

The draft law has been lying with the provincial authorities concerned for the last one-and-a-half years without any progress, while a similar law has been passed in all other provinces. Perhaps taking a cue from the success of the dharna politics that managed to get a murder FIR registered against state officials as high as the prime minister and the chief minister, the women workers from the informal sector decided to try the same strategy.

The workers from Punjab were so charged that they suggested reducing the deadline against HomeNet Pakistan executive director Umme Laila Azhar’s plea for extending it by one more month.

Labour deputy secretary Maleeha Rasheed, however, told the audience that the draft law had been received from the law department and a summary for the chief minister’s approval was being prepared before formal law-making.

LEF director Khalid Malik sought earlier law-making, warning that otherwise over 5,000 HBWs would stage the sit-in for an indefinite period after the deadline was over.

Although a thumping majority of the participants, mostly young and some of them carrying their kids, was either illiterate or poorly literate, they were confident and well-aware of their social, economic and political rights.

Teenaged Shamaiza, finance secretary of Kasur unit of HBWs union, said that over 400 workers had joined the union there and were regularly contributing to the union fund, a remarkable act keeping in view their meager earnings through piecework.
Inspiring to see were the women from Khyber Pakhtunkhwa who were usually not allowed even to step out of their homes what to talk of attending a trade union activity hundreds of miles away from their houses.
The KP workers have also taken lead over their counterparts in Punjab by getting registered their provincial level union some three months ago.
Tajmeena, the leader of an HBWs delegation from Mardan, KP, said: “The women grab the opportunity whenever they get a chance to raise a voice for their rights.
“Earlier, the women were afraid of assembling even at some colleague’s house, disunited, unaware of their rights and were going unrecognized as workers. Beginning the organization work from 2008, we did not look back again… The registration has given us an identity as well as enabling us to claim on fringe benefits like social security and EOBI.”

Though listening to speeches full of statistics used to be a boring activity, particularly for those who seldom step out of their houses, the participants of the Monday’s moot maintained a remarkable discipline throughout the day. Mr Malik said it was the third national convention of HBWs and the gathering was swelling each time.

Office-bearers of the Progressive Home Based Workers’ Federation, established a day before, also took oath of their offices. A charter of demands was also presented during the moot which included fixing minimum wages also for HBWs, recognizing them as workers, extending them EOBI and social security covers, providing them modern vocational training to add value to their work, offering them health and educational facilities as well as giving them access to market.

Ms Azhar informed the participants about the struggle so far made for winning rights for the HBWs, impacts of the drastic increase in the informal sector all over the world in general and in South Asia in particular.

Punjab Commission on the Status of Women chairperson Fouzia Viqar said the commission was a bridge between the civil society and the government and she promised to try her best for resolving the HBWs issues at the earliest.
Political activist Mehnaz Rafi, occupational health and safety expert Dr Huma Tabassum, All-Pakistan Workers Confederation president Rubina Jameel, and South Asia Partnership’s Irfan Mufti also spoke.