The middle class took America to the moon. Then something went horribly wrong 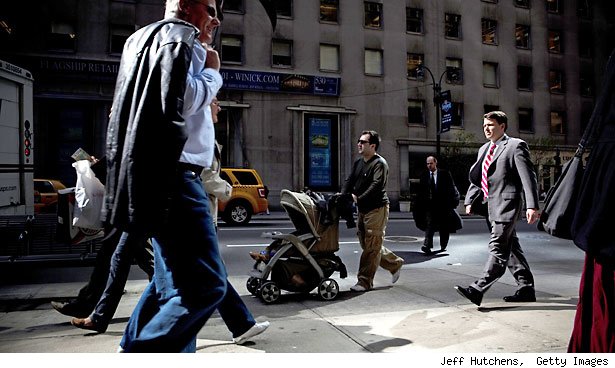 DOWNEY, Calif. — One day in 1967, Bob Thompson sprayed foam on a hunk of metal in a cavernous factory south of Los Angeles. And then another day, not too long after, he sat at a long wood bar with a black-and-white television hanging over it, and he watched that hunk of metal land a man on the moon.

On July 20, 1969 — the day of the landing — Thompson sipped his Budweiser and thought about all the people who had ever stared at that moon. Kings and queens and Jesus Christ himself. He marveled at how when it came time to reach it, the job started in Downey.

On a warm day, almost a half-century later, Thompson curled his mouth beneath a white beard and talked about the bar that fell to make way for a freeway, the space-age factory that closed down and the town that is still waiting for its next great economic rocket, its new starship to the middle class. They’ve waited more than a decade in Downey. They’ve tried all the usual tricks to bring good-paying jobs back to the 77-acre plot of dirt where once stood a factory that made moon landers and, later, space shuttles. Nothing brought back the good jobs.

Those jobs aren’t coming back. Not at the old North American Rockwell plant, and not in thousands of similarly socked towns.

Yes, the stock market is soaring, the unemployment rate is finally retreating after the Great Recession and the economy added 321,000 jobs last month. But all that growth has done nothing to boost pay for the typical American worker. Average wages haven’t risen over the last year, after adjusting for inflation. Real household median income is still lower than it was when the recession ended.

Make no mistake: The American middle class is in trouble.

That trouble started decades ago, well before the 2008 financial crisis, and it is rooted in shifts far more complicated than the simple tax-and-spend debates that dominate economic policymaking in Washington.

It used to be that when the U.S. economy grew, workers up and down the economic ladder saw their incomes increase, too. But over the past 25 years, the economy has grown 83 percent, after adjusting for inflation — and the typical family’s income hasn’t budged. In that time, corporate profits doubled as a share of the economy. Workers today produce nearly twice as many goods and services per hour on the job as they did in 1989, but as a group, they get less of the nation’s economic pie. In 81 percent of America’s counties, the median income is lower today than it was 15 years ago.

In this new reality, a smaller share of Americans enjoy the fruits of an expanding economy. This isn’t a fluke of the past few years — it’s woven into the very structure of the economy. And even though Republicans and Democrats keep promising to help the middle class reclaim the prosperity it grew accustomed to after World War II, their prescriptions aren’t working.

From the Great Depression through the 1980s, American recessions and recoveries followed a pattern: Employers shed jobs when the economy turned south but added them back quickly once it recovered. That changed in the early 1990s and worsened through the 2000s. Jobs came back more slowly, if at all. Even before the 2008 crisis, the 2000s were on track to be the weakest decade for job creation since the Labor Department started tracking the statistics. The great mystery: What happened? Why did the economy stop boosting ordinary Americans in the way it once did?

The answer is complicated, and it’s the reason why tax cuts, stimulus spending and rock-bottom interest rates haven’t jolted the middle class back to its postwar prosperity.

Downey illustrates the nation’s struggle to resurrect that shared prosperity, and it reminds us what the economy has lost.

Today, Bob Thompson’s rise to the middle class sounds like something from an old movie.

He graduated from Downey High School, served a tour in the Army and returned to his hometown to work odd jobs. The Rockwell plant loomed nearby, on a former orchard plot where town leaders once hoped to build Dodger Stadium. Thompson remembers the day the plant hired him — Aug. 4, 1965 — and his starting pay at his union job — $2.59 an hour — which was nearly double the minimum wage in California at the time. The week he got the job, Thompson drove down to Bill’s TV Shop and bought a new Quasar console, the first color set of his life, for $300. He was filling out the credit application when the salesclerk in the store asked where he worked. The plant, Thompson told him. The clerk waved away the paperwork. He knew he’d be good for the money. “I thought I was a king,” Thompson said.

He started off running blueprints from one end of the factory to the other. Then he worked his way up to plastics fabricator, foam sprayer, shipper of replacement parts between plants. Sometimes when the economy dipped or contracts dried up, he lost his job; the company always found him maintenance work or something else to help him get by until times improved and he got back to the plant. When he retired from the company in 2007, Thompson was making $24.95 an hour. He draws a sweeter pension than almost any worker starting out today could hope to receive.

Thompson’s rise mirrored the plant’s, which mirrored Downey’s, which mirrored Southern California’s, which mirrored America’s. North American won the Apollo contract in 1961 and ramped up to 25,000 workers, including production grunts, accountants and engineers. A lot of them bought houses in Downey, big adobe split-levels with lush green lawns. The easiest way to tell an assembly worker’s house from the top manager’s was to watch how often the Cadillac in the driveway gave way to a new one. When Rockwell won another huge contract, for the space shuttle in 1972, one of the top engineers handed the keys to his pickup truck to a younger worker. He told him to fill the bed with ice and champagne. Then he told another man to call a local restaurant and inform them that Rockwell would be taking the place over for at least the next 24 hours.

By 1990, there were nearly 200,000 aerospace workers in Los Angeles County alone, and the local median income had risen almost 20 percent since 1970, after adjusting for inflation. Then things cratered. The Cold War ended, and defense cuts starved the industry. More than half the county’s aerospace workers lost their jobs over the next decade, and when they found new ones, they weren’t nearly as good. The county’s median income fell more than 10 percent — and stayed there. The Rockwell plant shed workers steadily, was bought by Boeing and eventually closed in 1999. Thompson was lucky to find work at a different Rockwell site in Southern California; Downey was unluckily left with several hundred thousand square feet of factory space and a 25,000-job hole in its economy. The city manager vowed that not just anything would take its place. Downey would hold out for companies that paid people well enough to buy houses in town.

While Downey waited, the U.S. economy hurtled into a new and unwelcome frontier of its own. Jobs were slow to appear after the 1990 recession ended, even when growth sped up. The late-’90s tech bubble brought a shower of jobs and wealth, but when the bubble burst, all the gains were wiped out — except the ones for the wealthiest people in the country. The same was true for the housing bubble of the 2000s.

The first decade of the 21st century produced two recessions and two “jobless recoveries,” and when it was over, the vast majority of Americans found themselves no better off than they were a quarter-century ago. Median income kept falling for several years, even after the Great Recession ended.

That was especially true in Downey, where city leaders tried and failed, again and again, to lure good-paying jobs to the cavernous old Rockwell plant. They were going to make electric golf carts and they were going to build houses and shops, but both fell through. They briefly filmed some blockbuster movies, but the studio went bust and never employed many locals anyway. By 2010, the only people working in the former plant were a pair of historians, cataloging its aerospace past.

Finally, the wait appeared to be over. On May 20, 2010, Downey’s leaders huddled before a special afternoon city council meeting. They were set to approve a deal with Tesla, the pioneering electric car company, to manufacture its roadsters in the old Rockwell plant. They’d secured a multimillion-dollar federal loan to overhaul the equipment and become the lowest-emission car factory in the world. They’d drafted a lease. They’d reached what they believed was an oral agreement with Tesla Chairman Elon Musk. They would announce the deal in a news conference the next day. The new plant would move in next to a shopping center with a Best Buy, a space museum and a new state-of-the-art Kaiser hospital. It was going to bring a couple of thousand jobs.

Then the phone rang.

A wire-service reporter in Sacramento said Tesla was planning a news conference that afternoon in Northern California. It was going to build its cars there instead. The company promised wages would start at $16 an hour, plus benefits.

Downey would need to wait some more.

This is America’s story, too: It has waited decades for middle-class jobs to come back, through a loop cycle of political bickering, to no avail.

In Downey, city officials had finally waited long enough. They bulldozed their old economic engine. A developer crushed the Rockwell factory and left it in piles. Construction has begun on a second shopping mall. The mall will create a thousand or so jobs, but they almost certainly won’t pay anything close to what Bob Thompson made starting out at Rockwell.

In Downey today, “we have a lot of restaurants,” Thompson said. “There’s a lot of minimum wage. People take those jobs.”

Thompson now runs the Downey Historical Society, a dimly lit relic stuffed with space memorabilia. He sat in his office, amid model rockets and black-and-white posters of prop planes, next to a playground called Apollo Park. His wistfulness faded, and he turned, instead, to hope — hope that his country would reclaim its past glory, if not economically then at least astronomically.

I believe, he said, that Americans will walk on Mars someday.

He’s just not sure how they’ll get there.

This feature article originally published in The New York Times