Oregon incident has quickly led to questions about a double standard, particularly from liberals and the left, who asked: What if the armed men were Muslim or black?

The Oregon protest at a federal wildlife refuge has reignited an already intense debate on social media about policing, race and terrorism.

On Saturday, an armed group of antigovernment protesters occupied a remote federal wildlife refuge in Oregon and warned that they would not leave without a fight. The authorities have held back from attempting to stop the protest.

On social media, that led quickly to questions about a double standard, particularly from liberals and the left, who asked: What if the armed men were Muslim or black? They predicted the authorities would have been more forceful.

Many or all of the protesters appear to be white. It was unclear what religion they are, but at least one has made reference to a prominent Mormon figure. For its part, the Mormon church on Monday condemned the armed building seizure and said it could “in no way be justified on a scriptural basis.”

Some wondered why the news media and the authorities were not calling the takeover a form of terrorism. People used the hashtags #YallQaeda, #YeeHawd, and #VanillaISIS to challenge a widely held perception that terrorism applies only to crimes carried about by minorities and non-Christians. 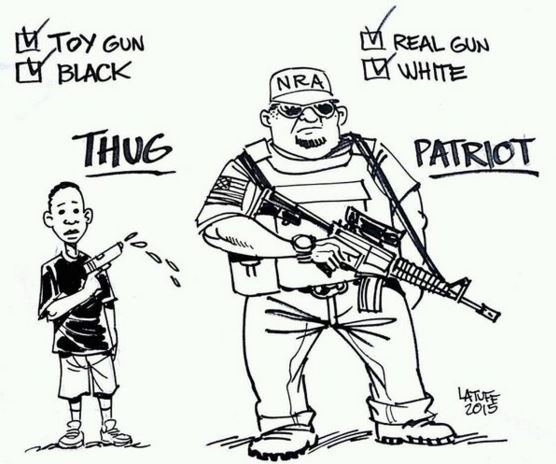 The leader of the armed group in Oregon is Ammon Bundy, the son of Cliven Bundy, a rancher in Nevada who in 2014 engaged in an armed standoff with federal officials, gaining the support of leaders in the conservative movement, then losing it after declaring that black Americans would be better off as slaves.

Still, many conservatives on Twitter criticized the debate, and said it was a step too far to call the men terrorists, and pushed back against memes that perpetuated stereotypes about white people.

Not sure the best reaction from the left is a burst of online bigoted stereotypes about rural white people. #YallQaeda Ahem.

Others objected to the criticism of the lack of force used by the authorities by drawing comparisons to past deadly standoffs between the federal authorities and armed groups that harbor antigovernment sentiments.

“Worth recalling lessons of Waco and Ruby Ridge before suggesting FBI should simply go to war with Oregon militiamen,” an observer wrote on Twitter on Sunday.

In February 1993, a gun battle erupted in Waco, Tex., between federal authorities and members of a religious sect called the Branch Davidians. The fighting resulted in the deaths of four federal agents and half a dozen members of the sect. That was followed by a 51-day standoff and another confrontation that left dozens more people dead. All told, at least 82 Branch Davidians died. A third of those killed were children.

A year earlier, a confrontation in northern Idaho between the authorities and Randall Weaver, a white separatist, led to the fatal shooting of his wife and son. A federal marshal was also killed during the conflict, which came after an 11-day standoff. In 1995, the government awarded $3.1 million to Mr. Weaver.

This article was originally published in New York Times