Australians have had to witness disturbing images in the past few weeks. Weak men who refused to eat behind barbed wires and fences, while others, choking on razor blades, eating washing powder and stitching their lips. It seems as though the pain and suffering has been exaggerated by the asylum seekers– but these chilling facts are True.

The detainees at the Manus Island Detention Centre do not want the Australian Federal Government plan to resettle them and other asylum seekers in Papua New Guinea. About 700 of the detainees went on hunger strikes refusing to eat and also rejecting water. They believe if they are re-settled in Papua New Guinea their life will not be safe. 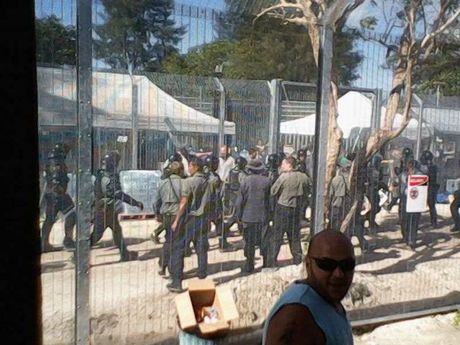 ‘The raids on Delta and Oscar compounds have only proved to the Manus Island detainees that PNG is not safe. They are continuing to demand that arrangements be made for them to settle in a safe third country,” said Ian Rintoul, spokesperson for the Refugee Action Coalition.

The Pacific Solution, was a policy of the Howard Government in Australia, which prevented unlawful maritime arrivals (boat people without documentation seeking asylum in Australia) and they were transferred to Offshore Processing Facilities in external territories, one of them being Manus Island. The centres were managed by the International Organization for Migration (IOM). In 2008 the facilities were shut-down under Prime Minister Rudd’s government but were re-opened again in 2012 seeing the increase of number of illegal boat arrivals.

Australian Immigration Minister Mr Peter Dutton described the claims that asylum seekers were denied food and water at Manus Island detention as rubbish. He says that there are certain ringleaders in the processing centre that have denied staff access to deliver food.

The clashes between security, staff, detainees and protesters keeps increasing but Prime Minster Tony Abbott suggest things have settle down and that the challenge has been defeated.

Refugee Action Coalition group says that the Australia government has been tight-lipped on the issue and have not provided the real facts. Mr Peter Dutton, the Immigration Minister, says the government will continue withholding information about operations involving asylum seekers and that minimal force was used with detainees unlike statements made by opposition groups. 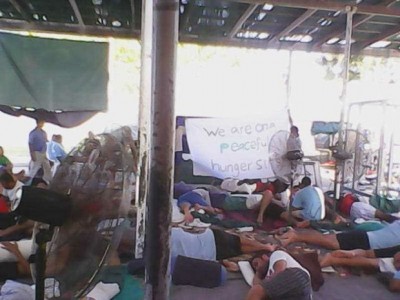 In the backdrop of all the tension, I spoke to one moving film-maker, Mr Lukas Schrank, who shares the stories of those asylum seekers behind the fences and what really happened on the night of 7 February 2014, where a series of protests by detainees at the centre escalated and resulted in the death of Reza Berati, a 23-year-old Iranian asylum seeker.

In October 2014, director Lukas Schrank, made phone contact with the men, who were able to tell their stories from within the compound. Their interviews offer a chilling insight into the reality of life for the 2200 detainees. 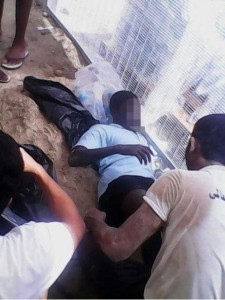 The two interviews, both recordings of phone calls from Manus Island, make up the narrative backbone of the film. The names of the men have been changed by the film-maker to protect their identities. This is one of the excerpt from the interview in the animated film ‘One year living on Manus Island was full of mental stress and physical stress. During the last year I lost two of my friends, Reza and Hamid. Reza was my roommate for one month on Christmas Island. Australia was his dream and he loved that country. Reza’s death shocked me and had a negative effect on my mental state. He was a lovely, quiet man. After Saeed, Reza was the second victim, unfortunately he was not the last victim. A month ago Hamid lost his life.”

The detainees speak of their struggle for survival, and attempts to avoid persecution in their home countries by seeking refuge in Australia. But like so many others, their journeys are ill fated. ‘I was looking at my friend’s face, And when I was looking at myself in the mirror, I said am in a safe place? If I want to go back to my country, I don’t know what might happen to me, and if I want to stay here, I don’t know what might happen again to me. At that time I really didn’t have any hope at all’.

Their stories are the voice of the film, guiding the animation through the back-streets of Jakarta, across the sea, and deep into the fenced facility of the Manus Island Regional Processing Centre – the regrettable home for the men for the last 16 months.

Mr Lukas Schrank says by illustrating these journeys and giving air to their stories, this short documentary illuminates the compelling personal side to the human rights crisis faced by those seeking asylum in Australia. It reminds the audience that the search for asylum is the search for survival. Another excerpt from the interview with a detainee ‘after three months I boarded a small fishing boat, unfortunately at the beginning of the journey to Australia our boat started to sink into the sea, and we had to struggle with the thought of death for 40 hours. We lost hope and accepted that we will die in that endless moment which everybody was exhausted and felt hopeless. In a second I had to save myself from the dark ocean. After swimming 30 meters I found a piece of wood that I could use while waiting for help. The most terrible thing happened. My friends Saeed and two other men lost their lives in the ocean. Saeed went down with his last attempt for life and I was not able to help him.’

Interview of Lukas Schrank, the director and film-maker of Nowhere Line: Voices from Manus Island with Sarwat Hassan

Mr Lukas Schrank is a director, designer and animator living and working across London and Melbourne.  He has in the past created animation for the BBC children’s television series including special video, short films to print projects and also spatial design.

At the moment tensions continue to escalate at the Manus Island Detention Centre after several days of hunger strikes being staged by the asylum seekers including incidents of self-harm. What has your reaction been?

I have been shocked about how little the situation has changed in the last year. I just hope that we don’t see a repeat of what happened in February 2014 and that no one is seriously harmed in the protests.

How do you think Nowhere Line: Voices from Manus Island film will help bring into limelight the reality of life for the 2200 people currently being held in Australia’s offshore detention centres?

I think that the film will be able to reach a slightly different audience than most of the existing media coverage of the offshore detention debate. With any issue that has been in the public eye for so long there is a level of desensitisation, people become numb to imagery and stories and they lose their meaning. So I hope that the film can bring the debate down to a human level – both through the nature of how the film is narrated, and the how the stories being told are illustrated. People used illustration as a method of communication tens of thousands of years before writing was developed, and I think the medium, and it’s evolution into animation, holds some value in this way – there is something inherently human and honest about it.

You have spoken to men within the compound on phone. How was your interaction with them and what thought provoked you to put their voices through this film?

My interaction with the men on Manus was not quite what I expected. Hearing stories told from a first-person perspective obviously has a very powerful effect, but I think it is also shocking that the men are speaking in the present tense – this isn’t a story which is being told retrospectively from a position of safety, it is happening right now. The two men I spoke with have been incredibly trusting and generous with their time and energy, and I hope that this comes across.

Some people who might support the government’s approach to this issue seem to see people seeking asylum in a way which separates them from us, that they are different somehow. I think that the interviews I have recorded with these men challenge that perception, they are just two normal people who have been incredibly unlucky.

I understand that you have been fundraising for this completion for film project, your deadline is February 6th how has your response been so far?

The response to the crowdfunding has been overwhelmingly positive and it has helped with the project in many ways beyond the financial backing that we will hopefully receive. There has been some negative attention as well, especially through Facebook, but that has also helped me understand the wider context of the issue and what people on the other side believe. I have been a little bit shocked at the level of hatred and extreme xenophobia out there but there are always going to be extreme sides to any debate, it’s just quite strange seeing it first-hand.

Where do you plan to showcase the film once it’s completed?

The nature of the film’s release is still being determined, ultimately it will come down to reaching the widest possible audience and in the shortest possible time. Normally I would do a festival fun before releasing a film publicly but this film just needs to get out there as soon as possible.