A Swedish report on global arms sales ranks defence firms from the United States and Western Europe as dominating the industry.

STOCKHOLM (Sweden) – Arms manufacturers in North America and Western Europe increased international arms sales in 2014, but their market share dropped as Russian and Asian companies saw theirs rise, according to a new report by a Sweden-based research institute.

Sales of arms and military services by the largest arms-producing companies totalled $401 billion in 2014, according the international arms industry report. Global arms sales in 2014 were dominated by defence firms in the US and Western Europe but Russian firms gained ground, the Stockholm International Peace Research Institute (SIPRI) report said Monday.

Of the top 100 defence companies listed, 64 were based in the United States and Western Europe, which accounted for about 80 per cent of global arms sales in 2014. Lockheed Martin retained the top spot ahead of US rival Boeing and British-based BAE Systems.

Russian firms accounted for one-tenth of total sales on the list. The top Russian seller was Almaz Antei, with sales of 8.8 billion dollars, and 11th place overall.

“Russian companies are riding the wave of increasing national military spending and exports. There are now 11 Russian companies in the Top 100 and their combined revenue growth over 2013-14 was 48.4 per cent,” SIPRI Senior Researcher Siemon Wezeman said.

Firms in Ukraine saw drops in sales over “the conflict in eastern Ukraine, the loss of the Russian market, and the fall in the value of the local currency,” he added.

Chinese companies were not included due to lack of data. However, SIPRI estimated nine Chinese firms likely could have been included on the list with two among the top 10, including aircraft maker AVIC.

Another trend that continued was the growth of emerging suppliers in Brazil, India, South Korea and Turkey, the report said. 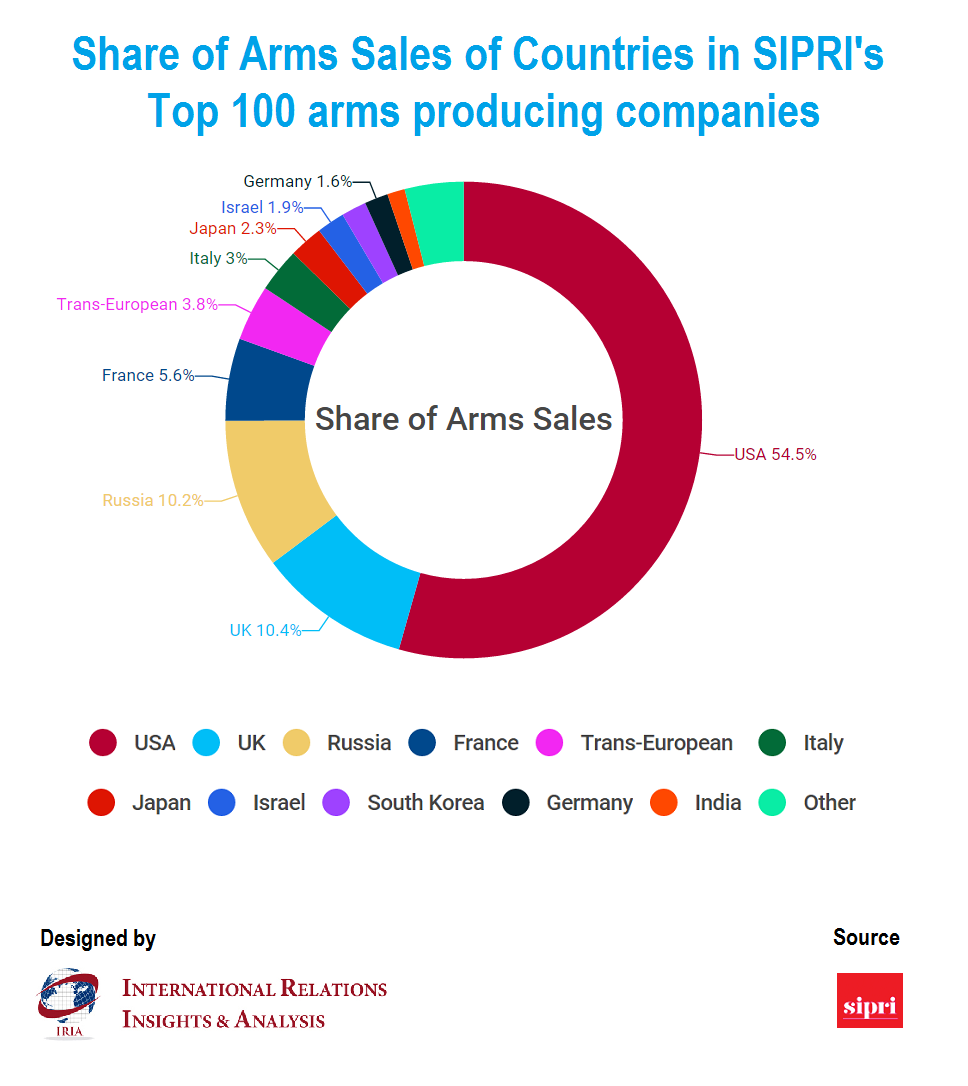 ‘With the acquisition of helicopter manufacturer Sikorsky Aircraft Corp. in 2015, the gap between Lockheed Martin and other companies ranked in the Top 10 will widen even further next year,’ says Aude Fleurant, Director of SIPRI’s Arms and Military Expenditure Programme. 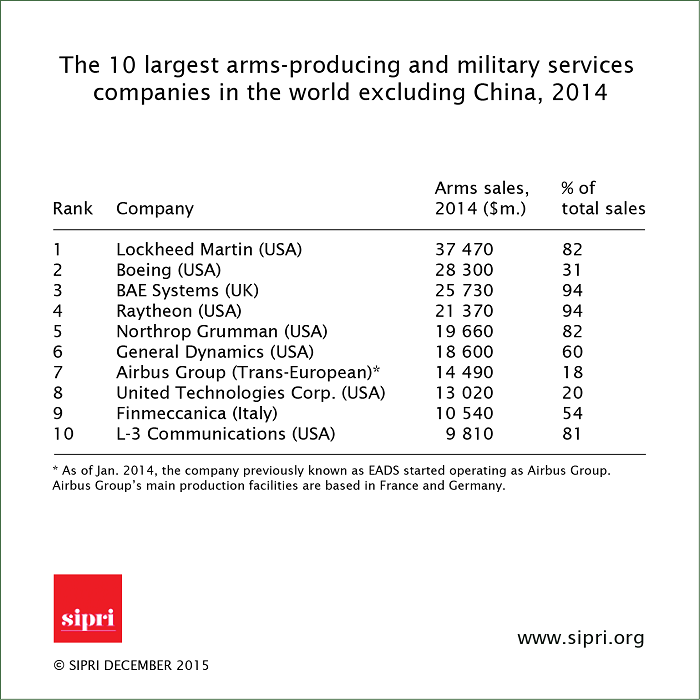 Two Turkish arms-producing companies ranked in the top 100: ASELSAN, which increased its sales by 5.6 percent in 2014 but has moved down in the ranking from 66th to 73rd; and Turkish Aerospace Industry (TAI), which has entered the top 100 at 89, with a growth in arms sales of 15.1 percent.

“Turkey is seeking more self-sufficiency for its arms supplies and this, coupled with an aggressive export drive, has contributed to the rapid growth in revenue for ASELSAN and TAI,” said Pieter Wezeman, another senior researcher at SIPRI.

South Korean companies also raised their profile in 2014, increasing their total sales by 10.5 percent compared to 2013. Hyundai Rotem, a military vehicle manufacturer, is the recent South Korean entrant to the top 100, which jumped from $430 million in 2013 to $770 million in 2014.

A total of 15 Asian companies, excluding Chinese manufacturers, were in the SIPRI top 100 list.

Despite difficult national economic conditions, the Russian arms industry’s sales continued to rise in 2014. The number of Russian companies in the Top 100 went up from 9 to 11, amounting to a share of 10.2 per cent of total arms sales in 2014. The two completely new entrants are High Precision Systems (39th) and RTI (91st), while United Instrument Manufacturing Corporation (UIMC) is on 24th position. The Russian company with most significant growth in arms sales is Uralvagonzavod, with arms sales increase of 72.5 per cent. Almaz-Antey, with 23 per cent increase in arms sales, is now on 11th position.

‘Russian companies are riding the wave of increasing national military spending and exports. There are now 11 Russian companies in the Top 100 and their combined revenue growth over 2013–14 was 48.4 per cent,’ says SIPRI Senior Researcher Siemon Wezeman.

Australian woman killed in shooting by US police in Minneapolis