Science, technology and innovation are key components of the upcoming United Nations climate change negotiations in Paris and governments should “do everything to support societies across the world, on every continent, to create and share knowledge”, the UN Educational, Scientific and Cultural Organization (UNESCO) has urged.

In a message on the occasion of World Science Day for Peace and Development 2015, UNESCO Director-General Irina Bokova reminded the world just two months after the UN agreed on a new sustainable development agenda that “science stands at its heart as a force for positive transformation and a development multiplier.”

Established by UNESCO in 2001, World Science Day is celebrated worldwide on 10 November each year to demonstrate to the wider public why science is relevant to their daily lives and to connect countries for the betterment of science and knowledge.

This year, the UNESCO World Science Report, issued every five years, is being launched on the Day to identify trends in science, technology and innovation, across every region.

“The key message of the Report can be summarized in just four words: more research – better development,” according to the agency.

“All governments recognize today the power of science to provide key answers for the better management of water, for the conservation and sustainable use of the ocean, for the protection of ecosystems and biodiversity, to tackle climate change and disasters, to foster innovation and to eliminate poverty and reduce inequality.”

And “to make the most of this power, we need to understand more clearly the global landscape of science and we need better tools to monitor progress,” Ms. Bokova said.

She noted that “growing concerns with recurrent drought, flooding, hurricanes and other natural phenomena have led Governments to adopt strategies at both national and regional levels to protect agriculture, reduce disaster risks and diversify national energy mixes.”

These issues, she explained, will be addressed in the forthcoming 21st Meeting of the States Parties to the UN Framework Convention on Climate Change (UNFCCC), widely known as COP21 to be held in Paris from 30 November to 11 December, when leaders from across will gather to adopt a new agreement on international cooperation to mitigate the consequences of climate change.

“Science, technology and innovation is essential here, and we must do everything to support societies across the world, on every continent, to create and share knowledge,” Ms. Bokova said. 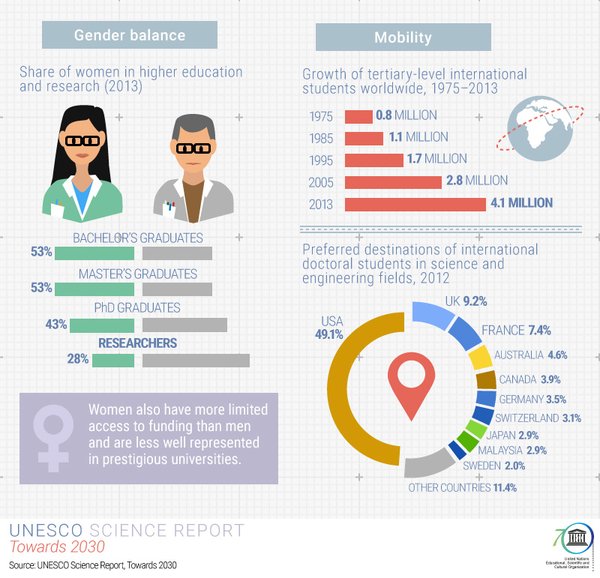 One issue raised by UNESCO this year is the disparity between men and women in the sciences. While women currently make up a slight majority of Americans who complete bachelor’s and master’s programs in the sciences, this lead drops precipitously at the Ph.D. level, where 43 percent of graduates are male. The real test comes when those students try to get jobs. When all is said and done, only 28 percent of science researchers worldwide are women.

Science literacy is quite low in the United States, where, according to Pew, most people don’t know that water boils at a lower temperature at higher altitudes. However, the situation is even worse in countries with low education and literacy,.

That’s why the 2015 Science report focuses largely on improving infrastructures in the developing world, and working more directly with local and indigenous people to improve basic science concepts, but equally importantly, for researchers and policymakers to learn from locals. Rather than coming in as experts, sure to “fix” the local populations’ problems, researchers should be treating indigenous people as experts in their own ecological systems. After all, a woman whose family has been dealing with flooding for generations will have more on-the-ground knowledge of disaster preparation than even the most knowledgeable academic. As UNESCO puts it, we need to “empower people to design the solutions they need.” 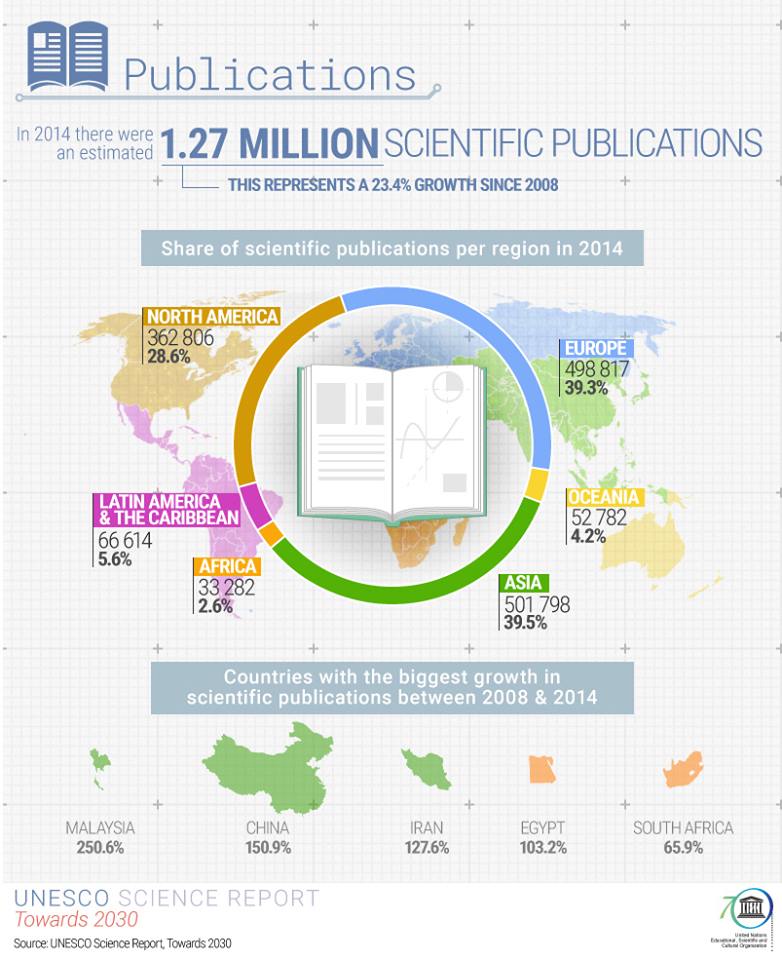