With heavy advertising all over television and the Internet, it was expected that Cricbuzz would reach over 10 million downloads. But what’s so special about it? It displays quotes from popular players about the performance of their co-players.

It also allows us to relive the historical World Cup jerseys of all the different teams. It’s interesting to see how the colors and designs of the jerseys changed over time, and who were the sponsors behind it.

Well, the first one in the list is official ICC Cricket World Cup 2015 android app that will give you the full tournament coverage including fixtures, schedules, official videos, live scorecards and much more.

One of the most beautifully designed Android app to follow Cricket World Cup 2015.

This is one of the most beautiful cricked Android app available that has awesome UI, works great on tablets, lightning-fast live score updates, live ball-by-ball commentary, ability to send scores by SMS to your friends and many more features.

You can also enable reminders on your calendar for the upcoming matches and this app also allows notifications when the innings starts or end.

If you are crazy about cricket, and watching a match does not fill your appetite, you can always play your own game on the world’s leading cricket game ‘Stick Cricket’.

Hit a six or score a four, make sure you are always on fire. You may be asked to chase down 300 runs in 5 overs. Make your team win the World Cup. Up for the challenge?

A dedicated app that is designed for those who just want to keep themselves updated about the ICC Cricket World Cup 2015.

This app will help them to check the schedules, fixtures, live scorecards, latest world cup related news and much more.

This one is a very useful app for those who just love Cricket and want to follow it all-year around.

This Android app will not help you follow only Cricket World Cup 2015 but keep you updated with all the matches that goes in any part of the world between any teams.

This one is Star Sports official Android app that any sports lover would love to install on their phones. This app will not only help keep you updated with all the latest videos, ball-by-ball commentary, schedules, fixtures about World Cup Cricket 2015 but also help you to watch other sports like Football, Formula1, Badminton, Tennis, Hockey, etc.

Another app that has awesome features other than the regular ones like live chats, commentary, comments and social media connectivity. Other than following cricket live scores, you can create your own group called Virtual Stadium where you can invite your friends, shout, clap, dance and laugh with other cricket lovers. You can also share pictures, videos, files and stay connected with Facebook and Twitter from within the app.

This is a free Android Cricket World Cup 2015 app that is different from other apps we have featured above. This app will notify when a batsman is out, hit a four or six just like you see in the below image. Not only this, you can also add comments while checking live scores that will be visible to all users.

Another app that is fast, responsive and with awesome UI. Any cricket lover should install this app and follow all-year round cricket matches from all over the world. For WC Cricket 2015, this app will provide you all details like fixtures, schedules, team summary, ball-by-ball live scores and much more. 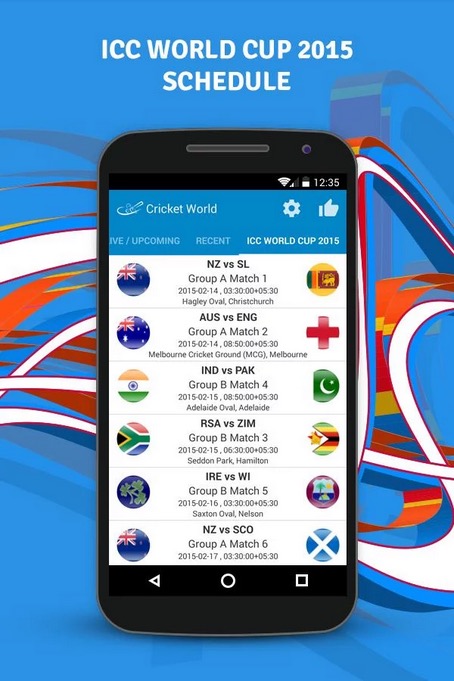