NEW YORK (United States) – Female CEOs are outpacing their male colleagues in pay, although they remain vastly outnumbered in the top echelons of American companies.

Last year, the median pay for women CEOs rose to $15.9 million, a 21 percent gain from a year earlier, according to a study by executive compensation data firm Equilar and The Associated Press. That compared with median pay for male CEOs of $10.4 million, which was down 0.8 percent from 2013.

Marissa Mayer, the head of Yahoo, was the highest-paid female chief executive in the Equilar/AP pay study. Her compensation was almost double that of the next-highest earner on the list – Carol Meyrowitz of discount retailer TJX Companies.

Still, there is a big caveat: There are far fewer female CEOs than males among large U.S companies. The study of 340 CEOs included 17 women.

Times are certainly good for female chief executives. In fact, they now trump their male counterparts in pay. During the latest fiscal year, female CEOs in the S&P 500 earned an average of $18.8 million, exceeding the $12.7 million average paid to the 455 male CEOs listed.

Yahoo’s stock price has climbed 177% since the technology company hired Mayer from Google in July 2012. That compares with a gain of 76% for the tech-focused Nasdaq over the same time. Earnings jumped at Yahoo last year after it raised $9.5 billion by selling part of its stake in Alibaba, the Chinese e-commerce site owner.

Meyrowitz has led the parent company of T.J. Maxx, Marshalls and other stores, since January 2007. For the year that ended in January, the company reported profit of $2.22 billion on revenue of $29.08 billion. The company said in February that it would lift hourly wages for its employees. Workers that have been employed for six months or more will earn at least $10 an hour.

When Whitman rejoined HP in 2011, the company’s board established an initial salary of $1 a year. For 2014, the board decided it was time to raise the salary portion of her pay package to make it consistent with her peers at similar technology companies. Her base salary increased to $1.5 million.

PepsiCo., which makes Frito-Lay snacks, Gatorade sports drinks and Quaker oatmeal, has improved its performance by raising prices and slashing costs. The company’s earnings were hit this year by currency volatility in countries like Russia and Bolivia, but this was offset by growth at Frito-Lay North America, which makes snacks such as Doritos, Cheetos and Tostitos.

Novakovic was a senior executive at General Dynamics for more than a decade before she was promoted to the top job in January 2013. Since she took the position, the defence contractor’s stock has doubled as it has increased dividend payouts and boosted stock buybacks.

The IBM boss was awarded a $3.6 million bonus for her performance last year, even though the company’s sales and profits declined. Her overall pay jumped from 2013, when Rometty and other top executives did not take bonuses after IBM turned in disappointing results.

Hewson is a 32-year veteran at Lockheed Martin and the second chief executive at a defence company to top the list of best-paid female CEOs. Her pay award increased as the company’s earnings rose. Lockheed’s stock also gained nearly 30%.

Woertz’s near nine-year tenure as CEO of Archer Daniels Midland ended in December, though she still holds the position of chairman at the company, which makes vegetable oil, ethanol and ingredients used in packaged foods and drinks. Her compensation included $501,560 for relocation expenses after ADM moved its global headquarters to Chicago from Decatur, Illinois.

The maker of Oreo cookies, Cadbury chocolate and Trident gum raised Rosenfeld’s overall pay by 14% last year. Shareholders didn’t fare as well. The company’s stock rose 3 per cent, compared with a gain of 11.4% for the broader stock market.

Kullman spent much of last year fending off an attempt by activist investor Nelson Peltz to gain more influence over the 212-year old chemical company. She prevailed in May this year after shareholders voted against his campaign. But the fight showed that DuPont needed to do a better job of explaining its transformation from a traditional chemical maker to a faster-growing company focused on agricultural products and advanced materials, she said. 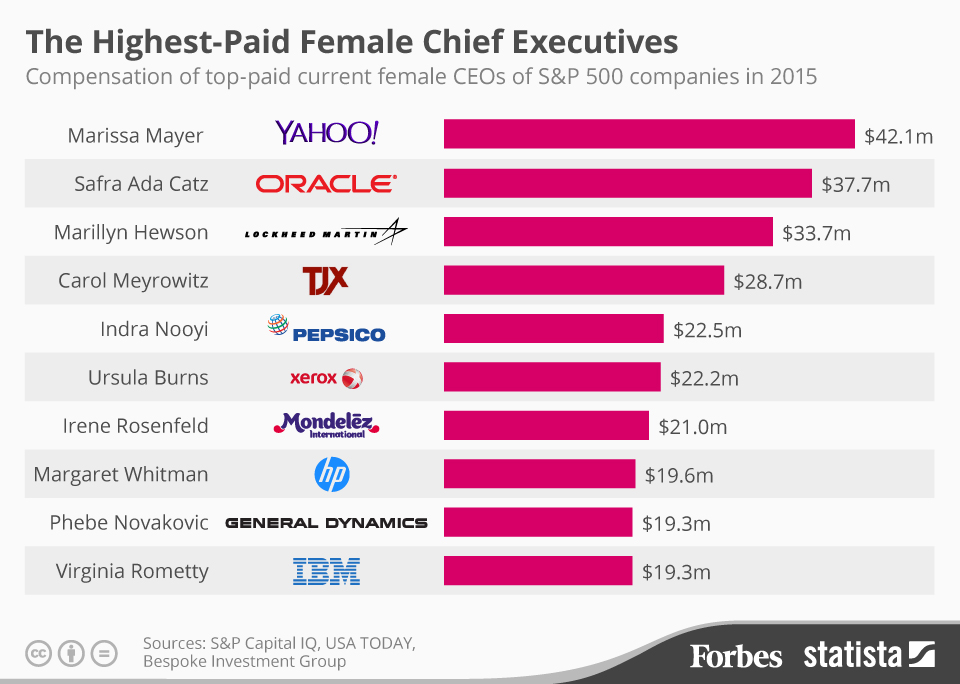