The T20 World Cup match between Pakistan and Australia will be played on Thursday, November 11 in Dubai (November 12 at 1am Australian Eastern Standard Time). After India’s historic defeat by Pakistan and being 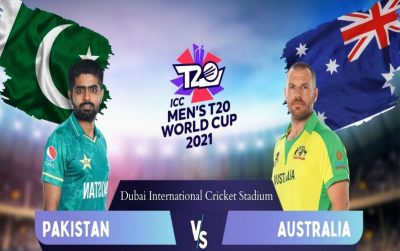 knocked out of the T20 World Cup tournament, the Pakistani community in Australia no longer cares whether Australia or Pakistan wins.

Cricket experts and senior players of the cricketing world believe that the world will watch a magnificent quality of cricket in this match. Pakistani team right now is in full form with all boxes ticked. Their team’s performance throughout the round matches and being unbeaten, proved that they are a strong side, well-organized and game-winning players, like young batsmen Babar Azam, Mohammad Rizwan, and senior players Mohammad Hafeez and Shoaib Malik. They have notable dangerous bowlers Shaheen Shah Afridi, Haris Rauf, and Hasan Ali with expert spin bowlers Imad Wasim and Shadab Khan. Babar Azam and Mohammad Rizwan are currently the best opening pair in world cricket. The biggest thing is that in this T20 World Cup, the Pakistan team has the most points in both the groups by winning all their round games. Now, no one can say that the performance of the Pakistani team is always unsteady or unpredictable. Therefore, being undefeated, the Pakistani team deserves to win this T20 World Cup.

On the other side is the Australian team. Australia has always been a strong team. They always had the best bowlers and batsmen in the cricketing world. Their team uses its full potential as a strong team in big games. The current Australian team has remarkable wicket taking bowlers Mitchell Starc, Josh Hazlewood, Pat Cummins, and spinner Adam Zampa and inform batsman Aaron Finch, David Warner and Mitchell Marsh.

The people of Pakistan love Australian cricketers and are always looking to emulate their cricket like them. In the same way, the Australian people are fond of the natural talents of Pakistani cricketers. When Kerry Packer started World Cricket Series in 1977 in Australia, he took five Pakistani players in the team. Also, Imran Khan, Javed Miandad, Majid Khan, Zaheer Abbas, Sarfraz Nawaz, Saqlain Mushtaq, Abdul Qadir, Wasim Akram, Waqar Younis, and Shoaib Akhtar have been the most popular cricketers among Australians over the years. There was a time when the Pakistani community was not so big and Pakistanis were rarely seen in Australia, then the Australian people knew Pakistan only because of their famous cricketers.

The cricket match between Pakistan and India was no less than a war. Even before the start of this T20 World Cup tournament, international cricket commentators had declared India the World Cup Winner. The Indian & international cricket media was singing the praises of India, but India’s historic defeat by Pakistani in the very first game of the tournament water-downed the desires of one billion Indians and disproved all the expert opinions of international cricket writers and commentators. The Indian team, which is called the number one team in the world, could not recover from the shocking defeat at the hands of the Pakistani team in the first-round game and since could not reach the semi-finals.

For the Pakistani community in Australia, it wouldn’t matter if Pakistan or Australia wins as they equally love both countries. Yes, the 220 million Pakistani nation wants to see Pakistan winning the World Cup. And in the context of the geopolitical dispute between India and Pakistan over Kashmir, it is very important for Pakistan to win the final and open the doors of World Cricket in Pakistan.

It is commendable that the Australian team has agreed to visit Pakistan in March next year. The West Indies team is also scheduled to visit Pakistan next month (December). It is also hoped other teams including India will play cricket in Pakistan. India should also respect the aspirations of the 1.5 billion people of India and Pakistan and start bilateral cricket between the two. Pakistan has always wanted to continue cricket with India, but the radical Indian (Hindu) government does not allow the Indian team to play cricket with Pakistan.

It is hoped on Thursday night, when Australia and Pakistan teams clash, the cricketing world will watch the highest quality and exciting brand of cricket.

The Tribune International congratulates both the Pakistani community in Australia and the Australian people at large on making the semi-finals.