A Message from the Director, Whitlam Institute — While Gough Whitlam will be remembered well beyond today, the days ahead will be particularly special times for remembering and  for sharing stories. They will be times of reflection on the man Gough Whitlam. The Leader. The intellectual. The visionary.

As one former Whitlam minister put it to me this morning after news of Gough’s death, ‘the memories are crashing over me like the waves on Bondi Beach.’ 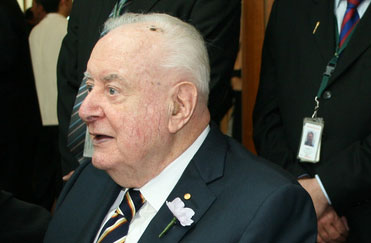 His achievements are not simply a matter for history – they are embedded in the living memory of our nation. Gough Whitlam catapulted Australia into the modern world. He claimed a place for us in the region and in international affairs. He educated a generation: funding schools on the basis of their need and opening our universities to all on the basis of their merit. He established universal health care and for the first time, committed the national government to developing the outer suburbs of our cities as well as regional Australia. He sought to right the wrongs of Aboriginal dispossession and he sought a place for all in this land we share. He transformed our country and the way we saw ourselves. Just as he set out to, he ‘uplifted the horizons of the Australian people’.

For all the fine words that could be written, for us all here at the Whitlam Institute on this day there is really only the simple reality that Gough is now gone. We had no greater enthusiast and no finer friend than The Leader himself at this institute that bears his name.
Our thoughts are very much with the members of the Whitlam family.  – Eric Sidoti, Director, Whitlam Institute