A photo of a little Syrian girl who ‘surrendered’ when a photographer pointed a camera at her, thinking it was a gun, has taken the social media by storm.

In the photo, the four-year-old girl identified as Adi Hudea has raised her hands, bitten her lips and stares at the camera with teary eyes, depicting resignation to fate.

The photo was taken by a Turkish photojournalist, Osman Sagirli, back in 2012 but his colleague tweeted it to his followers recently.

“I was using a telephoto lens, and she thought it was a weapon,” photographer Osman Sağırlı told the BBC. “İ realized she was terrified after I took it, and looked at the picture, because she bit her lips and raised her hands. Normally kids run away, hide their faces or smile when they see a camera.”

Sağırlı’s image of a 4-year-old girl named Hudea in a Syrian refugee camp with her hands above her head “broke the internet’s heart” as the BBC put it.

photojournalist took this photo 4 Syrian child, thought he has a weapon not a camera so she Gave up ! #Surrended pic.twitter.com/bm1hOWQWJY

The photograph, which was taken in late 2014, was first circulated on non-English language social media but more recently, spread quickly to English users. One tweet by Gaza-based photographer Nadia Abu Shabanone has been retweeted over 20,000 times. When the picture reached reddit, it received over 5,000 upvotes and over 1,600 comments. The Washington Post’s Abby Phillip sums it up well. “In that moment, in late 2014 at a Syrian refugee camp, she was immortalized as a symbol of the human toll that endless war and strife have taken on Syria’s displaced millions.”

Hudea has become a symbol but she is only one of 2 million Syrian child refugees according to the United Nations High Commissioner for Refugees (UNHCR). Now entering in its fifth year, Syria’s civil war has killed some 220,000 people and displaced almost four million.

“With half of all school-aged refugee children and another 2 million in Syria out of school, the number of young people at risk is staggering.” said UNHCR head António Guterres. “They have already lost their childhoods to a terrible war and are now also facing lost futures.”

These pictures depict the plight of the Syrian children: 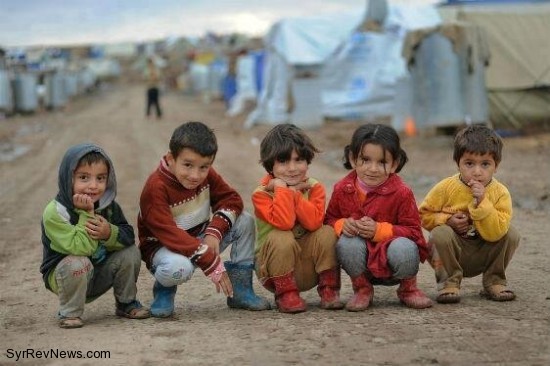