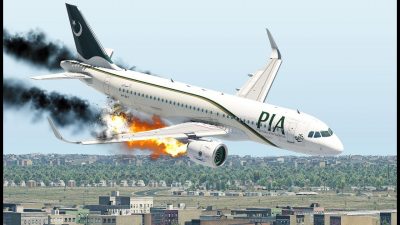 world. For the international aviation professionals, it was an honor to work for PIA. In Pakistan, PIA jobs were the top jobs with top-class remunerations. Until the 1960s there were only two international aero-planes service centers in Asia, one was in Karachi, and another was in Hong Kong. The global airlines preferred the service of their aircraft in Karachi as it was the best and cheap service. All top international airlines were flying to Pakistan until the 1970s. PIA’s pilots are recognized as the top pilots in commercial aviation. Then what happened to PIA, the flag- bearer of Pakistan-  a symbol of Pakistan reaching soaring heights? Just like every other previous rising national institutes and industries of Pakistan, Corruption has once again damaged the image and reputation of PIA internationally. PIA pilots and staff were charged with illegal activities. Political appointments from top to bottom levels have damaged the professionalism and performance of PIA. Today, even Pakistanis are hesistant to travel by PIA.

The recent incident of the PIA plane crash near Karachi airport brought a huge shame for Pakistan. Not only the matter of 97 precious human lives that died in this horrible plane crash; the post-incident handling of the inquiry of the incident and senseless statements of the Minister of Civil Aviation and other government spokespersons has led to the official decision of PIA flights banned from landing in European airports for at least next six months.

Mr. Ghulam Sarwar Khan, Minister of Aviation addressing to the parliament bluntly claimed without any proof that more than 30% of civilian pilots in Pakistan have fake licenses and are not qualified to fly. He further said that 262 pilots in Pakistan did not attend the qualifying exam; instead, other professionals deliver exams for the applicants, and the Pakistani pilots did not have flying experience. What an embarrassing statement for the Pakistani nation. Only an enemy of Pakistan can deliver that sort of explanation for the Pakistani Airline. The generalized statements about all the pilots of PIA were out of the context of the aircraft incident’s inquiry.

Minister’s claims not only brought shame for Pakistan but created panic among all the international civil aviation authorities and airlines around the world. International airlines probed against Pakistani pilots working for them.

The past governments of Pakistan Peoples Party and Muslim League (N) had already brought PIA in billions of dollars, and they were about to auction PIA. Now the premature and irresponsible statement of present government minister has not only brought down PIA further but put the jobs of genuine professional Pakistani pilots and engineers working for other international airlines.

There is no doubt due to growing corruption in PIA in the last 40 years, or so the organization has faced billions of dollars of loss, and it has been hard to run the plane on international routes.

Certainly, Imran Khan, since coming into power, must have plans to get the PIA out of the crises and bring back PIA’s lost image internationally. Imran Khan appointed Aslam R Khan as a new Chairman on PIAC board who has initiated cleaning PIA from corrupt mafia and forged appointees. According to Mr. Aslam Khan, PIA was slowly recovering the loss and coming into profitability. However, when the government appoints unwise and selfish politicians like Ghulam Sarwar Khan, known-to-be a political thug and always found in every ruling party, a minister for such an essential ministry of aviation, then the entire country has to pay the price.

Mr. Ghulam Sarwar Khan has not yet come out with any evidence on his statement that one-third of PIA pilots hold fake licenses; therefore, assumingly minister bluntly stated this without any adequate proof. Hence, Imran Khan, as a step one, should remove Mr. Ghulam Sarwar Khan from his present role and bring a competent technocrat on the position. (the writer is Sydney-based senior journalist and a political analyst, his email is shassan@tribune-intl.com )