Bangkok, Dec 29,2015; Considered, not only Thailand’s, but ASEAN’s largest Halal exposition, ‘Thailand Halal Assembly 2015’ was held with an aim to reflect the idea of ‘Halal Culture & Innovations for Halal Economy and the Country’s Prosperity’. Together with the credibility of the “Shari-Ah Certifies – Halal Science Supports” system, Halal business and trade can prosper the country’s economy as a whole. 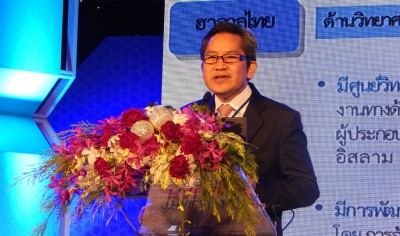 Part of the opening message from Prime Minister Prayuth Chan-Ocha said: “Presently Thailand ranks 12th among exporters of halal food products to the OIC member countries,” he said. “Our position is even lower than our counterparts in neighbouring ASEAN countries — Indonesia (7th) and Malaysia (11th). According to the government’s supporting strategy, Thailand’s Halal business and trade must step up to the first place in ASEAN by 2019”

“The highlight was the launch of Halal ingredient database called H4E or H Number for E Number,” Dr. Winai said. “This will add Halal Numbers into a conventional database for entrepreneurs who want halal ingredients to make a clear and easier decision to choose. H4E benefits both consumers and entrepreneurs. We provide manufacturers with H Number. So, Consumers don’t have to bear additional cost. We have committed analytical works for a period of 10 years, on more than 8,000 products and a total of 554 participating manufacturing plants, which involved 150,000 workers. The project is huge, and other countries still lack the capacity to do so. If Thailand wants to lead the world of Halal science, the provision of H Number is the key to place us there.

“Another attraction was simulation of Halal Forensic Laboratory, aiming to inspire and promote scientific study among young people. Guests also had an opportunity to learn about modern technology in Halal operation. This will help create credibility for consumers.”

“To reinforce the linkage between innovations and Halal works, we present Halal Science Exhibition on a digital platform. Through an application for tablets, people could view exciting stories involving the evolution of scientific knowledge over the past 3,000 years. Scholars and scientists from Germany, Switzerland and other European countries took the stage to give interesting lectures throughout the three-day event.”

“The Halal Expo zone featured lots of products from Asia, Africa, Europe, and America. The exhibition of Halal products from Thailand has good potential to encourage more exports to global Halal markets after last year’s total value reached US$1.2 trillion.”

“Supposed to create public awareness of Halal business as a major source of income for the country, the event also publicized achievements in our research and development, as well as technology and innovation. These are factors to build confidence in the quality and standard of Halal products, deserving our ambitious target for ‘Thailand Diamond Halal’ to become the world’s number one Halal emblem”.

“Considered a healthy way of living for all, Halal applies to food, products, and services that are reliable for quality and safety. Earlier this year, Halal Science Center Chulalongkorn University launched a project to raise potential of non-Muslim manufacturers of Halal products. Around 4,000 entrepreneurs attended the project, reflecting how Halal emblem is important and it is the certificate that consumers in general are looking for. Halal business now is a significant source of income, and also benefits the country’s export and tourism”, concluded Dr. Winai Dahlan.