With the fighting dragging into its fifth year the number of Syrians who have fled into neighboring countries to escape the civil war has reached more than 4 million and the number is rising, the United Nations says

ISTANBUL (Turkey) — More than four million Syrians (about a sixth of the total population) – have fled abroad since the outbreak of the country’s civil war, the United Nations refugee agency said Thursday.

According to a report issued by the agency, the total number of refugees from Syria stands at 4,013,000 which makes it the largest number for any single conflict in almost 25 years.

The head of the UN’s refugee agency, Antonio Guterres, called it the “worst humanitarian crisis of our generation”.

“This is the biggest refugee population from a single conflict in a generation. It is a population that deserves the support of the world but is instead living in dire conditions and sinking deeper into abject poverty,” UN High Commissioner for Refugees, Antonio Guterres, said.

An overwhelming majority of the refugees have fled to neighbouring countries, with Turkey hosting nearly two million alone, UNHCR said in a report released on Thursday.

More than seven million others have been displaced inside Syria since the start of the uprising in March 2011.

The UN High Commissioner for Refugees (UNHCR) said Turkey is home to the largest number of Syrians refugees – 1.8 million – and is reportedly preparing for a new influx as the conflict escalates near the border between the countries.

Many have also attempted the perilous boat crossing to Europe. Syrians made up about a third of the 137,000 migrants who crossed the Mediterranean in the first half of 2015.

“Worsening conditions are driving growing numbers towards Europe and further afield, but the overwhelming majority remain in the region,” he said.

The agency said the new figures were based on new arrivals in Turkey and updated data from the authorities on refugees already in that country.

In June alone, over 24,000 people arrived in Turkey from Syria’s Tel Abyad, where fighting had been raging between Kurdish armed groups and the Islamic State (IS) militants, and other parts of northern Syria.

More than 220,000 people have been reported killed in Syria since anti-government protests broke out in March 2011.

At least an additional 7.6 million people are displaced inside Syria — many of them in difficult circumstances and in locations that are difficult to reach, the report added.

“The exodus from Syria is the highest recorded since 1992 when the number of refugees from Afghanistan hit a staggering 4.6 million. In reality, the figure is even higher as it does not include more than 270,000 asylum applications by Syrians in Europe, and thousands of others not resettled in regional neighbours,” the report said.

The milestone of four million comes just 10 months after the number of Syrian refugees hit three million. The UNHCR expects the figure to reach around 4.27 million by the end of 2015.

At the end of 2014, one in every five displaced people worldwide was Syrian.

Despite being the world’s single largest refugee crisis, the number of people fleeing is still far lower than the number of Afghans who were forced from their country following the Soviet withdrawal. There were almost 6.3 million Afghans living in Pakistan and Iran in 1990, according to UNHCR. 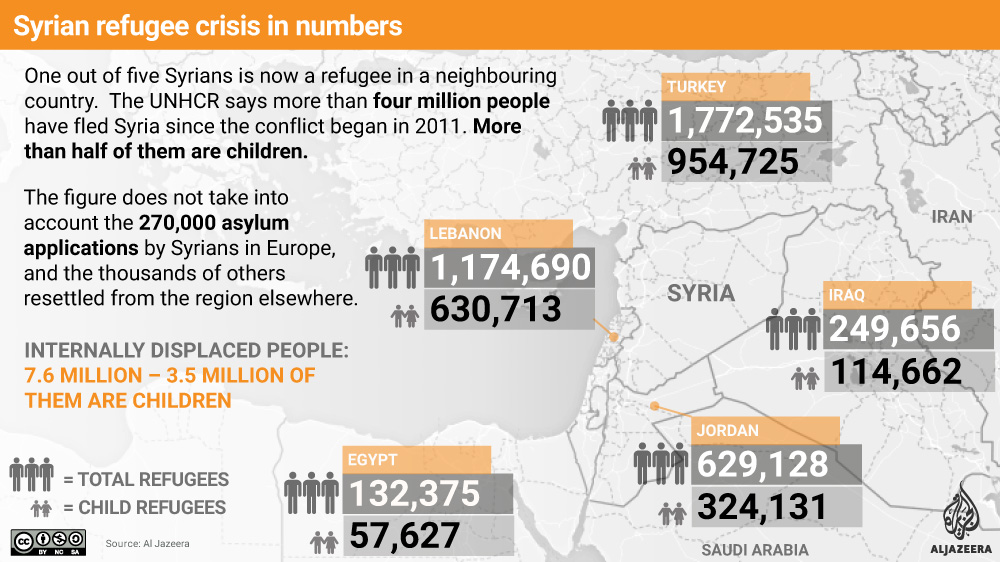