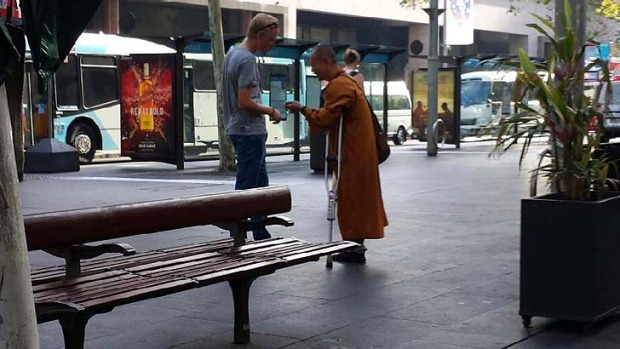 Sydney – NSW Fair Trading Minister Matthew Mason-Cox has warned people to be on their guard against scammers posing as Buddhist monks. “Fake Buddhist monks have once again hit the Sydney streets,” Mr Mason-Cox said.
“As more people converge on the Sydney CBD for Christmas, New Year and holiday festivities, so to have these scam monks.

“I urge people not to give these fake monks money, as they are nothing more than scammers, preying on people’s kindness.

Genuine Buddhist monks don’t ask for or collect money from strangers in this manner, he warned

There are reports that these fake Buddhist monks can become intimidating if people don’t give them money. If that happens, NSW Fair Trading is advising people to report incidents to the nearest police station. “People can also report fake monks to NSW Fair Trading on 13 32 20,’’ Mr Mason-Cox said.

The person who claims to be collecting donations on behalf of the charity approaches you face-to-face and does not have any identification. Remember, even if they do have identification, it could be forged or meaningless.

The person tries to put pressure on you by making you feel guilty or selfish if you don’t want to donate.

The person asking for money cannot or will not give you details about the charity, such as its full name, tax status, address or phone number.

The person asks for a cash donation and they don’t want to accept cheque. Or they want the cheque to be made out to them rather than to the charity.

“Anyone who wants to make a donation should approach charity organisations directly,’’ Mr Mason-Cox said.

Legitimate charities are registered in NSW with the Office of Liquor Gaming and Racing.