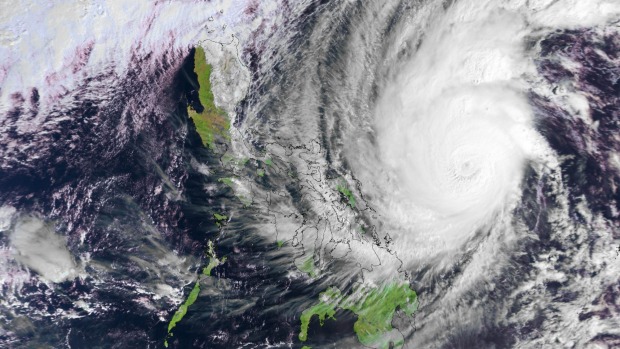 Typhoon Hagupit began to lash the eastern Philippines with ferocious winds and heavy rain Saturday, knocking down trees and causing power outages and forcing half a million people to leave their homes.

More than 616,000 coastal residents have fled coastal villages and landslide-prone areas in the central Philippines as typhoon Hagupit bore down on the eastern coast where thousands were killed in a devastating storm last year.

Hagupit — Filipino for “smash” or “lash” — known locally as Ruby, was expected to move slowly across a vast area and dump intense rainfall of up to three-quarters of an inch per hour.
The vast storm system packed winds gusting up to 130 mph as it made landfall in a region still recovering from last year’s Typhoon Haiyan, which left more than 7,300 people dead or missing.

Senior Inspector Alex Robin said: “We are totally in the dark here. The only light comes from flashlights.” The Philippines’ 120,000-strong military is on alert to respond to a possible catastrophe.

General Gregorio Pio Catapang said: “We’re on red alert, so the entire armed forces is being mobilised for this typhoon.”

About 10 million residents of the Bicol and eastern Visayas regions were deemed at risk from flooding, storm surges and strong winds. AccuWeather global weather centre said more than 30 million people would feel the impact of the typhoon across the country.

Millions of people in the Philippines began seeking shelter in churches, schools and other makeshift evacuation centres.

“It’s better to evacuate early…We don’t want to experience what we went through during Yolanda,” said Gigi Calne, a housewife seeking shelter with about 3,000 others at a school in Basey, in Samar province, in central Philippines. “It was difficult to save our family and ourselves because we moved too late.”

UN says the evacuation is one of the largest in Philippine history. The U.N. Global Disaster Alert System said almost 32 million people — a third of the country’s population — were likely to be affected in some way by cyclone-force winds.