DUBAI, Arab Emirates, Jan. 18, 2022 (Globe Newswire); Admiral Osama Rabie, Chairman of the Suez Canal Authority (SCA), attended on Sunday morning the international conference the SCA organized under the title ‘The Suez Canal and Challenges in World Trade’ as part of Expo 2020 Dubai.
The conference discussed how to support global trade amid different challenges, including the coronavirus

pandemic, as well as the policies and procedures adopted to ensure the sustainability of the services the SCA offers and the continuation of the flow of global trade through the Suez Canal, which is the lifeline of supply the world over.
Nevine Gamea, the Egyptian Minister of Trade and Industry, participated in the seminar via videoconference. Other participants included Yehia Zaki, Chairman of the Suez Canal Economic Zone, and a host of officials working in the maritime transport sector locally, regionally and globally, as well as representatives of the most prominent international commercial and maritime associations, institutions, companies, and shipping lines. 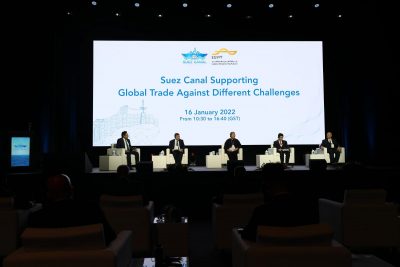