Singapore has topped the list of best expatriate destinations for the second year. Among nearly 27,000 expats in 190 economies, Singapore is the best place to live, work and raises a family abroad, according to the latest and ninth edition of HSBC’s annual Expat Explorer report.

Sweden is the best place for raising children, while Switzerland offers the best wages, according to an influential global survey.

Singapore’s quality of education is rated the best in the world. Among expats in Singapore, 75 percent consider the quality of education there better than in their home country, compared with 43 percent overall in the survey. New Zealand ranks eighth, followed by Japan in ninth place and Hong Kong in 11th.

New Zealand and Spain took first and second place in the experience country league table, scoring highly on criteria such as quality of life and ease of getting set-up in a new country. The majority of expats say they moved to New Zealand (59 percent) and Spain (56 percent) to improve their quality of life, compared to 32 percent of expats globally Canada ranked third in this category.

Sweden remains the best place in the world for families abroad, taking the top spot in the overall family category including school and childcare quality and cost of bringing up kids. Singapore is in third place and New Zealand in fourth. Taiwan, Thailand, Hong Kong, and Australia round up the Asia-Pacific entries in the top 20.

Norway emerged as the sixth best country for foreign workers, and not far behind are Austria, Sweden, Bahrain and Germany in the 7th, 8th, 9th and 10 places, respectively.

Overall, 66 percent of expats agreed that Singapore offers a better quality of life than their home country (compared to 52 percent of expats globally), while three-quarters (75 percent) said the quality of education in Singapore is better than at home, the highest proportion in the world (global average 43 percent).

HSBC’s tables ranked 45 countries in total. The U.K was ranked 22nd in the overall league table and performed considerably better on economics table (16th place out of 45) than it did on experience (30th) and family (29th). The U.S. was 30th overall – like those in the U.K., expats in the U.S. ranked their economic prospects higher (20th) than they did their experience (34th) and their family life (37th).

More than 26,000 respondents were polled to determine the list. Respondents were asked to share their views on life abroad, including careers, financial wellbeing, quality of life and ease of settling for children. 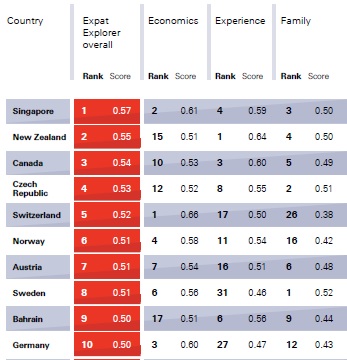