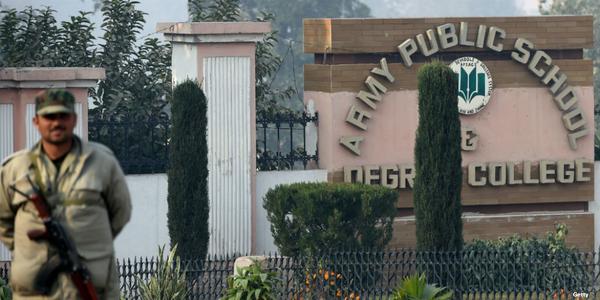 The stunned and shaken people of Pakistan mourned the Peshawar Army Public School massacre of 149 people including 132 children, the government announced new measures to combat terrorism. Prime Minister Nawaz Sharif announced the removal of the ban on the death penalty for terrorist offences which had been in force since 2008. Mr Sharif had lifted the ban last year, but re-imposed it when he launched peace talks with militants.

Pakistan hanged two convicted militants Friday in the country’s first executions in years. The execution of death penalty for four terror convicts in KotLakhpat jail of Lahore was delayed on Saturday amid security concerns. Pakistan’s newspaper, The Nation, reported that two of twenty four terrorists on death row in Punjab jails have been hanged whereas fourteen of them have filed appeals against the death sentences. The prisoners will be executed after the appeals are rejected.

The Peshawar Army Public School massacre has sparked an unexpected debate on the 2007 brutal military operation against the Lal Masjid (Red Mosque) and Hasfa Islamic School in Islamabad where around 2,000 people most of them boys and girls students were killed.

Maulana Abdul Aziz of Lal Masjid poured sarcasm on the civil society people demonstrating and lighting candles for the Peshawar dead and said they should also have felt pain for the 82 madarsa students killed in Bajaur and other deaths in military operations. “My brother, his family and many people dear to me and a large number of students were killed in army operation here (in Lal Masjid in 2007), but I did not raise such hue and cry,” he said. After the Friday congregation was over, members of the Ahle Sunnat Wal Jamaat demonstrated in support for Maulana Abdul Aziz and against the killing of schoolchildren in Peshawar.

Altaf Hussain, leader of Muttahida Qaumi Movement (MQM), a leading political party of Pakistan, demanded the arrest of Maulana and closure of Jamia Hafsa for his remarks regarding the Peshawar massacre. A number of people also staged demonstration against Maulana Abdul Aziz in Islamabd.
The Lal Masjid massacre

It may be recalled that several thousand trooped troops stormed the Lal Masjid at dawn on July 10, 2007. The 36-hour brutal operation ended in the death of several hundred people, most of them boys and girls students of Jamia Hafsa.

The regime of General Parwez Musharraf deployed several thousand troops, including many of Pakistan’s elite units, in the heavily-populated center of the capital, Islamabad, then ordered an attack on the Lal Masjid that included artillery barrages, even though they knew that hundreds of unarmed people, including women and children, likely remained inside. According to some accounts, Musharraf personally directed the assault, which was led by an elite commando unit that he had previously commanded.

Pakistani authorities claimed to have found 75 bodies in the Lal Masjid and put the total number of dead in the eight-day siege at around 108, including ten military personnel. Eighty-five of the 108 deaths reportedly came during the two-day storming of the Lal Masjid.

The Dawn, Pakistan’s leading English daily, reported that an unnamed source who had visited the Lal Masjid and the adjacent Jamia Hafsa seminary for women shortly after the army takeover said the floors were littered with corpses wrapped in white shrouds: “I could not count them but they must be in the hundreds.” The Dawn also observed that “a promised media trip to the site was put off a day, fuelling speculation that the government was buying time to remove some telltale signs.”

Ever since the military launched its action to seize the mosque, reporters were barred from the three closest hospitals, so as prevent them from gauging the number of dead and wounded. Reporters who toured the mosque complex described it as a battlefield, with bullet-riddled, blood-stained, and in some cases blown-out walls.

On the Lal Masjid assault, Bill Van Auken, presidential candidate of the Socialist Equality Party in 2004, wrote: “For many years, Lal Masjid was virtually a government-run mosque, enjoying the patronage of successive Pakistani military rulers going back to Ayub Khan more than 40 years ago.

“It was under the last military dictator, Zia ul Haq, that the mosque became closely enmeshed in the policies then being pursued by both the Pakistani regime and the US in the region. It served as a significant ideological and material base of support for the CIA-backed mujahideen fighting against Soviet forces in Afghanistan. In return, Zia granted it the exclusive real estate where yesterday’s fighting unfolded.

“Maulana Abdullah, the Muslim cleric who ran the mosque for decades, was assassinated in 1998. His sons— Abul Aziz and Abdul Rashid, killed in the assault —took charge of Lal Masjid, maintaining close ties to the successors of the mujahideen, including Afghanistan’s Taliban and Al Qaeda—a relationship they shared with the Pakistani regime and the ISI (Pakistani Intelligence Agency).”

Maulana Abdul Aziz of Lal Masjid has said the people who are holing candle light vigils for the victims of Peshawar Army School should also have felt pain for the 82 madarsa students killed in Bajaur and other deaths in military operations.

At least 82 people, almost all of them students, were killed in a missile attack on a madarsa in Damadola village in Bajaur region on October 30, 2006. An eyewitness has stated that the madrassa was filled with local students who had resumed studies after the Eid ul-Fitr holiday.

Dawn newspaper quoted local residents as saying that the air strike was carried out by fixed-wing US drones which fired hellfire missiles at the compound, killing all those inside the seminary, including its administrator Maulvi Liaqat Ali. “Pakistani helicopters arrived 20 minutes later and fired rockets at the hillside,” one resident said. The US denied involvement.

Maulana Sirajul Haq, the senior Minister and Provincial Chief of the Jamaat-e-Islami party, resigned from the Khyber-Pakhtunkhwah cabinet in protest against the strikes. Sahibzada Haroonur Rashid, Member of National Assembly from Bajaur Agency, also resigned from the National Assembly in protest. No journalist was allowed to enter into Bajaur and passengers entering the tribal region were asked to identify themselves.

Surprisingly, the strike on Damadola, the second since January 2006, came the day the government was expected to sign a peace agreement with militants in Bajaur replicating the September 5 truce reached with militants in North Waziristan.

Pakistan’s military in mid-June had launched an all-out operation, named ‘Zarb-i-Azb’, against the militants in the North Waziristan which is still under way. Moreover, months into Zarb-i-Azb, the army also launched Khyber 1, an operation to clear out militant strongholds in the tribal region of Khyber.

Meanwhile, Pakistan Airforce jets continued indiscriminate attacks on targets in Tirah valley for the third day Saturday. The sorties were carried out in Santana, Nangrosa and Therkho Kas areas — places believed to be strongholds of the Lashkar-i-Islam. Seven of the hideouts were destroyed, officials claimed.

However, Dawn newspaper quoted independent sources as saying that eight civilians — a teenage son, three grandsons and two women of the family of a tribesman, Taj Mohammad Qambar­khel, and two of his Afghan guests — were killed when his house in Therkho Kas was attacked by the planes.

Abdus Sattar Ghazali is the Chief Editor of the Journal of America. He can be reached at: Asghazali2011@gmail.com