Russia, Philippines have the highest share of women in senior business roles

When it comes to the percentage of senior management roles held by women, the United States, United Kingdom ad Australia are far behind much of the world.

With 45 per cent of senior management positions held by women, Russia has once again topped a ranking of countries with the highest percentage of women in senior business roles, followed by the Philippines and Lithuania, according to Grant Thornton’s Women in Business 2016: Turning Promise into Practice report.

According to the survey by US-based accounting firm Grant Thornton, 45 percent of senior management positions are held by women in Russia while in the US the percentage stands at 23 percent (the highest figure since 2007). Moreover, the UK has marginally declined in the last year, with 21 percent of senior roles now held by women (down from 22 percent in 2015).

Globally, only a quarter of senior management positions are held by women, up from 22 per cent a year before, according to Women in Business published by the US-based audit and tax firm Grant Thornton.

The number of businesses with no women in senior management has increased to 33 per cent from 32 per cent in 2015, the report that surveyed 5520 businesses in 36 countries said.

‘Companies across developed nations have talked the talk on diversity in leadership for long enough,’ Francesca Lagerberg, global leader for tax services at Grant Thornton International said in a statement.

‘It’s time to put their promises into practice and deliver results.’

With more than a third of senior roles in the region held by women, eastern European countries, among them Estonia, Latvia and Poland, topped the diversity rankings.

The report found some positive news for the United States, with the percentage of senior roles held by women moving up to 23 percent from last year’s 21 percent figure. However, the report also cautioned that the proportion of U.S. businesses with no women in senior management is almost one-third (31 percent) – a figure that mirrors the 33 percent global number.

“The fact that about a third of businesses have no women in senior-business roles speaks volumes,” said Erica O’Malley, national managing partner of Employee Benefit Plans and People Experience at Grant Thornton LLP. “It means a third of businesses still have no female input into executive decisions and no women helping grow the business at a leadership level.”

The report also points out that diversity is not just “the right thing to do,” it’s also good business, and can improve the bottom line. Previous Grant Thornton research cited in the report found that publicly listed companies with male-only boards in the United Kingdom, United States and India are forgoing potential profits of $655 billion.

Meanwhile, 39 per cent of businesses in G-7 countries (Canada, Germany, Italy, France, Japan, Britain and the United States) had no women in senior management positions.

“Despite considerable efforts by governments and campaigners across the world’s best-developed economies to ensure best practice they continue to lag behind emerging markets in (the diversity) area,” Ms Lagerberg said.

“This poor performance seems to be at least partly a result of entrenched societal norms. In the UK and US in particular, there are still plentiful examples of a ‘command and control’approach to leadership which is not necessarily attractive to women.” 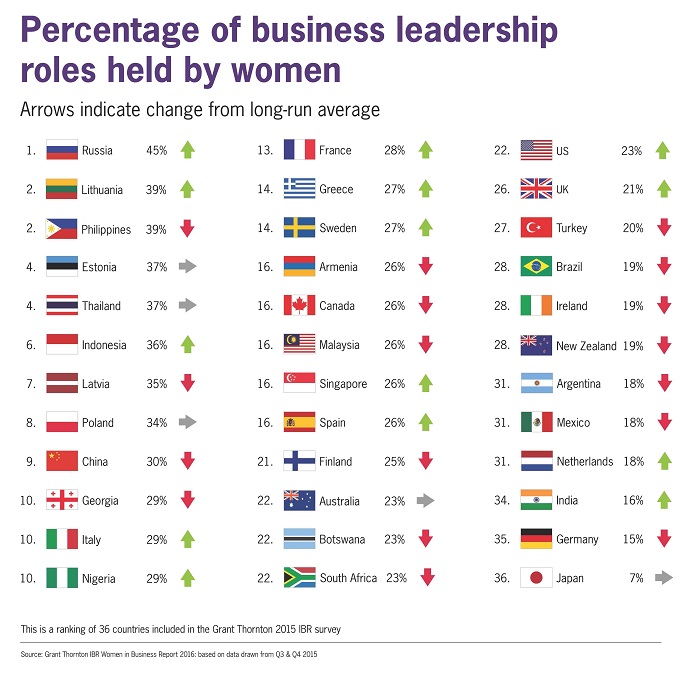