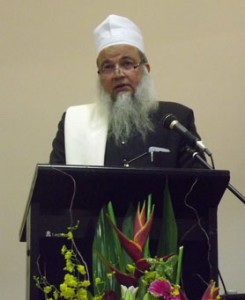 and matters related to first International Halal Conference being held in the Halal Expo Australia 2016 Sydney on 10th of April 2016.

Brother Nazeer ul Hassan Thanvi belongs to a prominent religious family ‘Thanvi’ of Indian sub-continent background particularly that of Pakistan. He has been living in Australia for the last 28 years. He was the first Imam of Rooty Hill Mosque from 1987 to 1992 and also a Halal Certifier/Supervision for Islamic Association of Western Suburbs from 1990 to 1992. He has also worked as:

In 1989, Mr. Thanvi officially launched the Hilal sighting and establishment of lunar Islamic calendar in Australia.