The Pandora box of corruption in Pakistan is unstoppable

The on-going investigations against Pakistani Prime Minister, Nawaz Sharif, and his family in relation to Panama case running in the Supreme Court of Pakistan, has revealed more forms of corruption and money laundering. As the stories are building up almost daily basis now, it has been unsurfaced that many ministers, top level politicians and government officials in the centre, Punjab and Sindh, obtained employment documents from the private companies in the United Arab Emirates (UAE) in order to frequently trave to UAE, transfer money earned through corruption to UAE and establish their private and business assets in UAE. The copies of their employment certificate (Aqama) became viral on Pakistani social media.

During 1960s and 1970s the Arab states, especially UAE, started to build. These states were looking for skilful 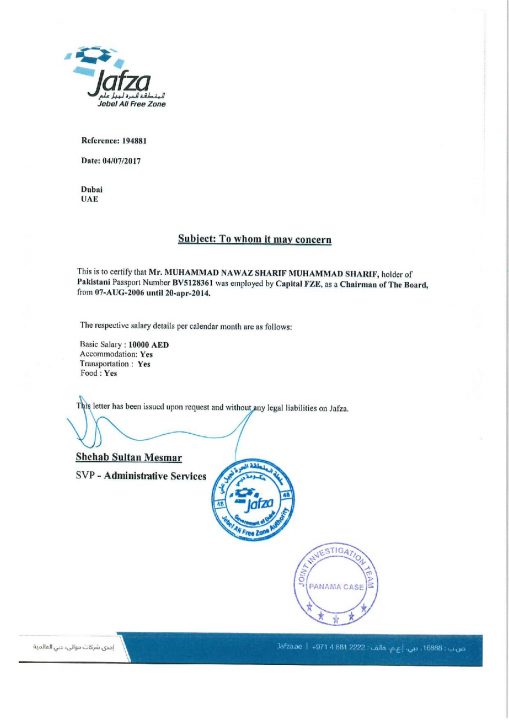 professionals and blue-collar workers in various fields. Therefore, gulf states became the golden employment destinations for Pakistani professionals, handymen and labour. Dubai was considered as the land of opportunity which is still the case in some special fields for some professionals and business operators. Hundreds and thousands of Pakistanis obtained employments in UAE as a better option financially for themselves and their families. These hard-working, talented and skilful Pakistanis, over the period, established their own businesses in partnership with locals, today they are among the top UAE business elite, at the same time, they have played a vital role in supporting Pakistan’s national economy.

According to various statistics, 20 percent of Pakistan’s revenue is generated through overseas Pakistanis who send money to Pakistan to their relatives and needies almost on daily basis.

Now as the stories are unfolding, there were people in Pakistan, who found this employment opportunities and set-up businesses with the locals in partnership in gulf states, as a playing field for hiding and transferring their black money earned from corruption in Pakistan to UAE through hawala (money laundering). Among these Pakistanis are the top Pakistani politicians, ministers, parliamentarians and high government officials. While they were enjoying top ministries in Pakistan they were holding employment position in different companies in UAE.

Pakistani nation was shocked when it was a breaking news in Pakistani media, that Pakistani Prime Minister, Nawaz Sharif, was holding a position of chairman for a Dubai-based company – FZE Capital – receiving a salary of AED 10,000 per month until 2014 when he was holding the position of Prime Minister. Since, then more stories of employment of senior Pakistani ministers became the headlines in Pakistani media. For example; the chief minister of second big province of Pakistan, Sindh, was having an employment as a supervisor in Hotel Holiday Inn in Dubai. Member Sindh Assembly and former interior minister, Sharjeel Memon holds a position of Marketing Manager for a company called FBS Business Services, federal minister for defense, Muhammad Asif Khawaja, holds a position of ‘legal advisor private law’ for International & Mechanical Services company in UAE.

Pakistani former President and Co-Chair of Pakistan Peoples Party Asif Zardari, his sister Faryal Talpur, his son and daughters, they all live in Dubai, on what visas they reside in Dubai? Similarly, federal finance minister, Ishaq Dar, chief minister Punjab Shahbaz Sharif and his children, frequently travel and live in middle east on what visas they travel and stay? It is not difficult to believe that they must have done the same crime of having employment of different companies or established their own businesses in partnership with locals in order to build their assets outside Pakistan, transfer money from Pakistan by illegal means while they are holding top government positions in Pakistan.

It is not difficult to understand now that if Mr. Nawaz Sharif owns billions of dollars of assets in UAE, England and other parts of the world beyond his legal means, no wonder his path to build these assets must have started with first obtain an employment visa (Aqama) from UAE government so that he can establish his business and assets first in Dubai and then other parts of the world through set-up fake companies in Panama.

It is obvious that when Mr. Nawaz Sharif would have submitted papers to the UAE authority to obtain employment certificate (Aqama) he must not have declared that he holds top government position in Pakistan. Therefore, Mr. Nawaz Sharif and all those whose employments are coming on surface now are not only the offenders of Pakistani government but also of UAE government, as while they are employed by companies in UAE they were running political affairs and positions in Pakistan which understandably they would not have disclosed. Therefore, UAE government should also take this matter seriously, seize their assets, freeze their bank accounts and cancel their employment visa (Aqama) if still valid immediately. UAE government will be giving a huge favour to the poor nation of Pakistan whose money they have looted and build assets in foreign countries, if they take abrupt action.

Common people of Pakistan are hardworking, and talented people, for their better future they leave their motherland, work in difficult situations in various countries and take care of their love ones and families, at the same time, they are playing a back-bone role in Pakistan’s revenue. On the other what these corrupt and fraudulent mafia, on the name of politics and democracy is doing. They have dragged Pakistan almost to defaulter by the international monetary agencies. Pakistan is hardly making payments of circular debts of the interest being charged on billions of dollar loans.

At this time; the entire Pakistani nation is looking towards the Pakistani judiciary and expecting a server and harsh punishment with long-term imprisonment to these criminals, so that Pakistan can be cleaned from corrupt mafia without further delay and a transparent system can be implemented. (The writer is a Sydney-based journalist and analyst, his email is shassan@tribune-intl.com ).