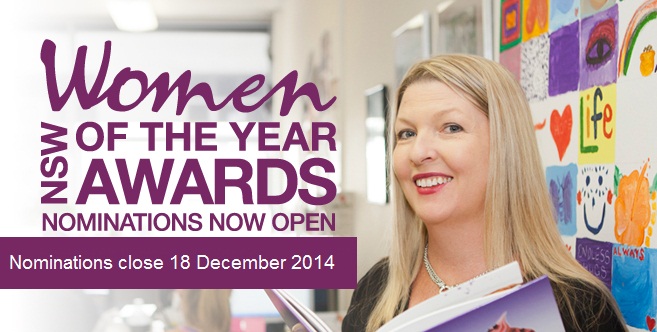 Nominations are now open for the 2015 NSW Women of the Year Awards which is in its fourth year of recognising the outstanding contributions of women in NSW and celebrates their significant individual achievements.

Last year a record number of nominations were received and there were same amazing winners, including burns survivor Turia Pitt (link is external) who won the Premier’s Award for Woman of the Year 2014.

Judges will consider the nominees’ achievements in 2014, as well as their past achievements and ongoing contribution to the NSW community.

This year there are four prestigious categories you can nominate for:

If you know an inspirational woman who is accomplishing amazing things and deserves acknowledgement, this is your opportunity to share her story with the wider NSW community by nominating her for the 2015 NSW Women of the Year Awards.