Over 200,000 people moved to Australia, in order to live permanently in 2013 to 2014 financial year, there has been a big increase in the number of international students.

Official figures from the Dept of immigration and Border Protection show that 207,900 migrants got settled permanently in 2013 to 2014, And India, is the main source of new arrivals with 40,000 arriving.

The Minister for Immigration and Border Protection Peter Dutton said the report contains a wealth of information about the current trends in migration.

“The report provides a rich and valuable source of information on how immigration is shaping our nation,” Mr Dutton said.

Australia granted 290,000 student visas in 2013-14 – the highest number since the Global Financial Crises.

The Minister for immigration, also welcomed the rise in student number from overseas.

“This is proof Australia’s Student Visa Programme continues to remain strong and appealing to the overseas market and keeps its place as one of Australia’s major export earners,” Mr Dutton said.

Tourist numbers from China increased by almost a quarter in 2013–14 reflecting its large and growing middle class.

In 2013–14, the permanent Migration Programme delivered almost 128,600 places under the Skill stream and just over 61,000 places through the Family stream. 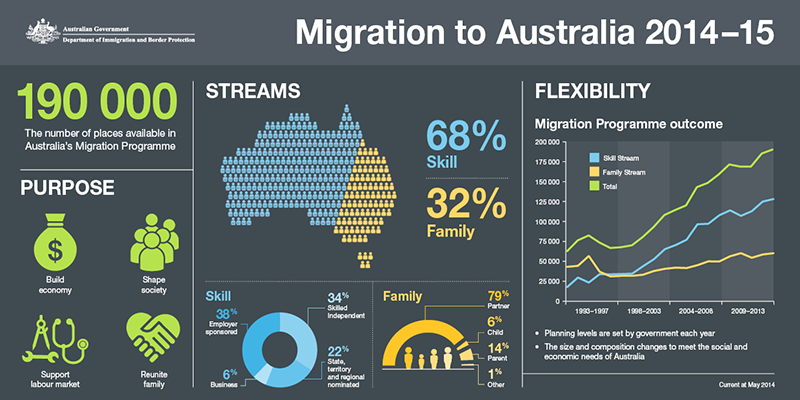