OSLO – The 17-year-old Malala Yousafzai, global icon of the struggle for education for girls, has received the Nobel Peace Prize, making her the youngest ever recipient of the prize. Malala dedicated her prize to the “forgotten children who want education, those frightened children who want peace and for those voiceless kids who want change.”

Pakistani education activist Malala Yousafzai and Indian campaigner for the rights of children, Kailash Satyarthi were jointly awarded the 2014 Nobel Peace Prize in Oslo “for their struggle against the suppression of children and young people and for the right of all children to education”. Satyarthi, 60, and Yousafzai, 17, will share the $1.1-million Peace Prize.

Satyarthi has been campaigning to help millions of child laborers in India for several decades. Satyarthi spoke first after accepting his prize, giving a stirring call to action and a condemnation of the reality in many places worldwide.

Malala belongs to Pakistan’s Swat valley, once known for its beauty and tourism, but rising extremism in the valley suddenly changed life. Schools were destroyed and girls were stopped from going to school. But Malala continued going to school and also blogged about her experiences for the BBC. As a result, she was shot and wounded in the head by the Taliban two years ago. After her recovery, Yousafzai has extended her campaign for girls’ education – supporting and speaking all around the world for the cause.

“The terrorists tried to stop us and attacked me and my friends on 9th October 2012, but their bullets could not win. We survived. And since that day, our voices have only grown louder” she said remembering the tragic day, adding that her story is the story of many girls. “I am not a lone voice, I am many. I am those 66 million girls who are out of school.”

United for the similar Cause despite differences

One is Pakistani, the other Indian. One is Muslim, other is Hindu. One is a school girl just starting out in life, the other a man with decades of experience.

Despite their many differences, 17-year-old Malala Yousafzai and 60-year-old Kailash Satyarthi – co-winners of the 2014 Nobel Peace Prize, honored for their heroic endeavors, are connected because of their common campaign for the rights of children to education and to lives free of violence.

“I am also glad that we can stand together and show the world that an Indian and a Pakistani can be united in peace and together work for children’s rights” Malala remarked.
“A young girl and a somewhat older man, one from Pakistan and one from India, one Muslim, the other Hindu; both symbols of what the world needs: more unity,” said Nobel Committee chairman Thirbjorn Jagland.

Indian and Pakistan duo “will for all the future form part of the row of gold that forms our Nobel history – the row of campaigning people. People who have created the ‘global conscience’ of which we can all be the bearers” Jagland added.
Jagland also referred to Satyarthi’s vision of ending child labor and how he abandoned a career as an electrical engineer in 1980 to mount his campaign.

“Why is it that countries which we call “strong” are so powerful in creating wars but so weak in bringing peace? Why is it that giving guns is so easy but giving books is so hard? Why is it that making tanks is so easy, but building schools is so difficult?” youngest Nobel peace laureate Malala asked in her speech.

“Dear sisters and brothers, let us become the first generation to decide to be the last. The empty classrooms, the lost childhoods, wasted potential—let these things end with us. Let us begin this ending” she appealed. 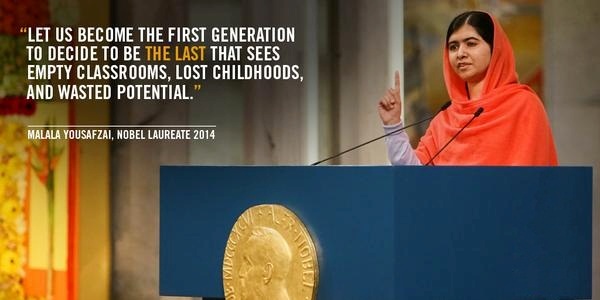 Explaining why education is important especially for girls, she said her answer is always the same: “What I have learnt from the first two chapters of the Holy Quran, is the word Iqra, which means “read”, and the word, nun wal-qalam which means “by the pen”? and therefore as I said last year, “One child, one teacher, one pen and one book can change the world.”

Malala Yousafzai, the young campaigner for girls’ education, told in her speech that she has decided to dedicate the Nobel Prize money to the Malala Fund, “to help give girls everywhere a quality education. The first place this funding will go is where my heart is, to build schools in Pakistan—especially in my home of Swat and Shangla.”

Malala Yousafzai has invited five extraordinary young friends to attend Wednesday’s ceremony in Oslo. Her former classmates Shazia Ramzan, 16, and Kainat Riaz, 17, both of whom were also shot in the October 2012 Taliban attack that nearly killed the teen campaigner joined her to commemorate her achievement. Three other young, female activists are: Kainat Soomro, a young Pakistani woman fighting for justice years after a sexual assault; Mazon Almellehan, a 16-year-old Syrian refugee and education advocate; and Amina Yusuf, a 17-year old from northern Nigeria who mentors young girls.