TOKYO, (Japan) – A South Korean Asiana Airways plane smashed into a communications antenna as it came in to land at a Japanese airport, footage showed today, injuring 27 people in an accident with echoes of the airline’s fatal 2013 crash in San Francisco.

Aerial footage from Hiroshima airport in western Japan showed the localiser – a large gate-like structure, six meters high that sits around 300m from the start of the runway – splintered, with debris spread towards the landing strip.

Air safety authorities in Japan are investigating how a Sou 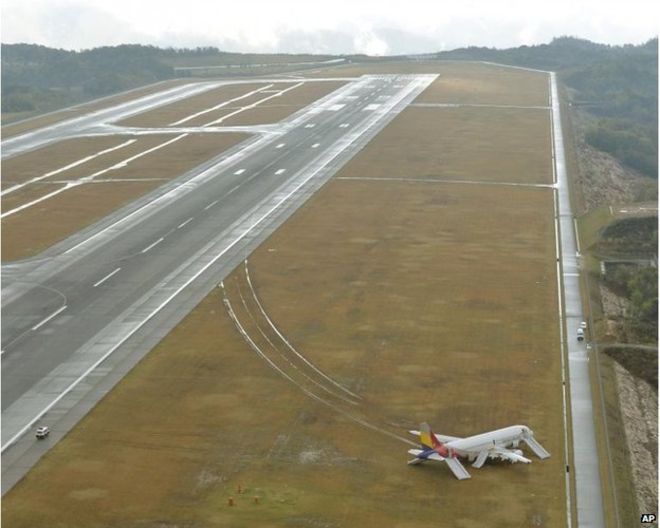 The 74 passengers and seven crew members used emergency chutes to evacuate the Airbus 320 in the incident late on Tuesday.

Local media reported that at least 20 people had minor injuries.

Images from the scene showed apparent damage to the 6m (18ft) tower, with mangled metal torn down.

An aviation safety official told AFP news agency that the left side of the plane’s tail was damaged and the country’s transport safety board was investigating.

Asiana Airlines apologised for the incident, and said it had set up a response team to cope with the aftermath.

“As to the determination of the cause of the accident, we will co-operate as closely as possible with the relevant authorities,” it said.

Passengers told NHK that they heard an explosion after landing, and the cabin was soon filled with smoke and a burning smell. The plane also appeared to be sliding on the runway.

“There was smoke coming out and some of the oxygen masks fell down. Cabin attendants were in such a panic and I thought ‘we are going to die’,” one woman told Japanese networks on Tuesday night.