Financial market volatility appears to be occurring more regularly and is certainly more widespread relative to previous times, however, the answer to increasing uncertainty can be traced to the push for more innovative leveraged products globally.  Islamic finance and Investments are certainly a welcome relief to an otherwise global epidemic which seems destined to eventual capitulation.

To understand the cause of continuous market instability and turmoil, one must first understand the global push for greed, innovation, leverage and demand for unearned or artificial wealth creation. The vast majority of people on the planet would welcome a free dinner with open arms, and the concept of leverage to obtain more wealth is too enticing for the average risk taking individual. The ‘follow the herd’ mentality applies to a variety of cases, with the desire of creating undeserved wealth being at the forefront.

The global economy is drowning itself in debt, particularly since the advent of Keynesian economic theory last 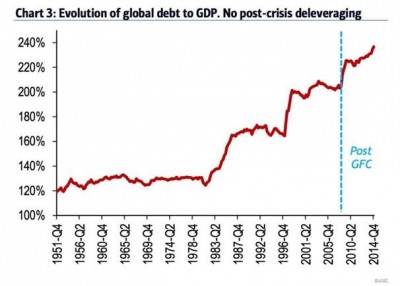 The latest data shows that total world debt is running above 313% of annual GDP.  To put this into perspective the global combined total GDP is approximately $75 Trillion dollars. The global GDP at Purchasing Power Parity (PPP) stands at $106.998 trillion, which suggests that the debt is destined to never be paid.

The US economic meltdown occurred when household debt reached about 120% total debt to annual GDP, currently Australia has the highest level of household debt in the world running well above 120% of GDP.  The only way to keep interest payments serviceable is with a low interest-rate environment.  Could you imagine the volume of interest payments globally if interest rates started to increase more substantially? Hence, it is certainly not a priority of central banks to increase rates any time soon, which could cause substantial market turmoil and an avalanche of defaults on debt.

In the year 2000, every $2.4 of debt creation produced $1 of GDP growth, however today that figure is up to $4.6 for every $1 of GDP growth. Clearly the economic policy of most governments worldwide has become less effective. A better solution is required urgently. 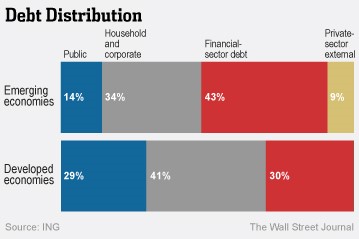 higher rates which accompany riskier assets. The following chart shows the distribution of total debt across the globe.

Individuals have chased higher yields across the globe, hence a total of $230 trillion and more in public, private, and corporate liabilities.  Yet what we are seeing is a large amount of rent seeking and more debt being required to generate $1 of GDP. Governments need to accept that there is such a thing as ‘too much’ debt. Individuals should buy within their means, but unfortunately they are told to buy today with tomorrows earnings, hence the concept of purchase now and pay later.

The 1929 stock market crash and subsequent depression accompanied by World War 2 is a great example of the effects of toxic global debt, described by the famous economist Irving Fisher in his theory of debt-deflation. The theory essentially implies that the following events occur which leads to global market turmoil:

All the above events have begun in some form or another in the past few years around the globe. To the extent that investors are very nervous with fear and concern over the state of affairs of global markets and investments, so much so that they believe in placing their money in cash is more beneficial (hoarding of money).

According to the McKinsey report, global debt has increased by $57 Trillion dollars since the global financial crises (GFC) in 2007 to the end of 2014. Some countries like China have quadrupled their debt in that time period, for the sake of stimulating their economies. Governments are increasing debt at unsustainable levels, whilst household debt is also reaching new peaks.

Unfortunately, governments, like most households, are unable to control their debt levels, and appear to obtain more debt just to pay the interest on their current debt. Basically, there are two mechanisms for governments to control debt:

Most governments are unwilling to reduce expenditure due to political and self-interests, and are unwilling to increase taxes extensively due to unpopularity, therefore, embarking on a path of obtaining more debt to fuel their self-interest, undermining economic growth and causing continual instability.

Global authorities justify their actions by claiming that they are implementing Keynesian economics i.e. the GFC caused many to conduct monetary policy to provide stimulation to the local economy. However, they do not realise that they have now caused a global debt glut destined to cause the next catastrophic financial crises. By no means is it suggested that the crises will occur this year or in the short term, but if this continues, then it will result in catastrophic financial and economic consequences.

The dangers of debt and compounding is illustrated by the following quotes by the then President of Nigeria:

Islamic teachings and principles dictate how we should earn our income i.e. in a permissible and lawful way (Halal),

how to conduct business, charity, wealth accumulation, social responsibility and communal development.  Islamic financial instruments have been used since the 7th century with great success, and taken back to Europe by traders and the crusaders in later years e.g. Sukuk (Bonds). The first official Sukuk was offered by the Ottoman empire in 1755, hence Islamic finance is not a new phenomenon.

Leveraged products like derivatives, CFD’s, Margin lending, FX market etc., have vastly contributed to the current debt crises, along with short positioning. Islamic principles do not allow an investor to directly benefit from assets falling in value, interest based products, speculation and uncertainty. Essentially, the rich get richer and the poor get poorer, due to market control and power. The larger institutions and individuals are allowed to benefit substantially if they think the markets are going to fall and they have enough power to move the markets. Islamic principles do not allow these types of transactions and manipulation, hence the dislike by many large players in the market for Islamic investments.

In simple terms, Islamic investments allow real equity based investments permitted by Islamic law, and any form of profiting from speculation and unlawful leverage is forbidden, hence the damage of such products is clear for all to see. The damage caused by not following the laws placed by the ultimate creator is severe and the consequences will eventually be paid by all.

Hejaz Financial Services (HFS) is one such company in Australia which invests based solely on the principles and guidelines set within Sharia, hence it is against the trend of the conventional global financial system. HFS is led by a dedicated team of investment experts with over ten years’ experience in Islamic investments. The company is pioneering Islamic Superannuation and Investments along with many other financial services.

With many branches across Australia, please contact our dedicated team of customer service specialists to organise a meeting with one of our financial advisers for a free consultation.