By Ben Phillips, (University of Canberra)

50% of all income tax in Australia is paid by 10% of the working population.“ – Federal Treasurer Joe Hockey, interview with Fran Kelly on ABC RN Breakfast, July 27, 2015.

According to the 2015-16 Federal Budget, Australians paid around A$176 billion in personal income taxation in the 2014-15 financial year (Table 5 of Budget Paper 1). The Treasurer, Joe Hockey, claims that around 50% of this taxation is paid by the top 10% of the working age population as ranked by their income.

NATSEM’s STINMOD model of the Australian tax and transfer system can be used to evaluate the accuracy of such a claim.

STINMOD is based on ABS survey data (Survey of Income and Housing) which provides a statistically reliable and representative snapshot of household and personal incomes and demographics.

STINMOD is not publicly available, but as a NATSEM researcher, I was able to use the model to check Hockey’s claim against the evidence. STINMOD is benchmarked to taxable incomes data from the latest Australian Tax Office taxation statistics on the distribution of tax payments by income.

When I restricted the STINMOD base population to the working age population only (aged 18 to 65) and rank these people by their taxable income, I found that the top 10% (those with taxable incomes beyond $102,000 per annum) do pay around 52% of all personal income taxation. 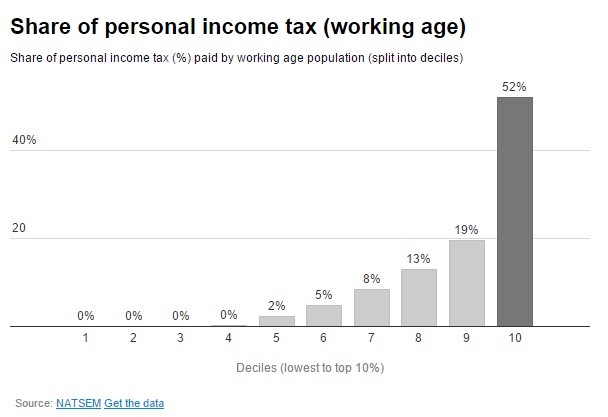 Since high income earners usually have greater scope for minimising tax through deductions, such as negative gearing, we can use an alternative income measure called “total income from all sources” to rank personal incomes. On this ranking, the share of personal income taxation paid by the top 10% drops to 50.5%.

Australia’s personal income taxation system is strongly progressive, with higher income earners paying both a higher marginal tax rate and average tax rate compared to lower income earners. According to STINMOD, the 90th percentile of working age taxable income is $102,000 per year, while the median taxable income is $39,000 per year. The average tax rate of the 90th percentile is 26.7% while that of the median tax payer is less than half that at 12.3%.

This analysis does include a large number of people who are of a working age but not in the labour force – around 21% of this population (2.9 million persons). These people are not in the labour market for a range of reasons such as disabilities, students, young parents or through personal choice or a range of other reasons. Removing these people from the analysis reduces the tax share to 46% paid by the top 10%. 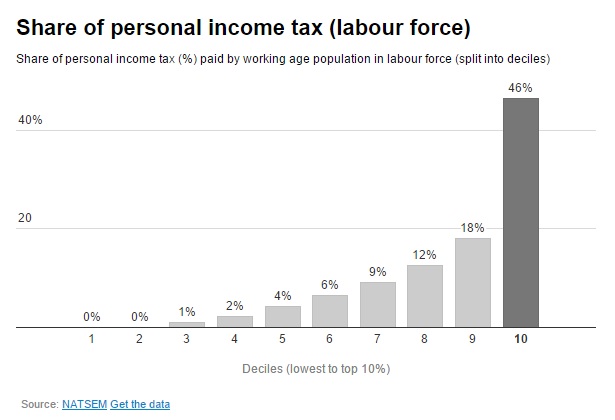 In 2014-15, personal income taxation made up around 47% of all tax received by the federal government. Other taxes are paid to state and local government. While personal income taxation is highly progressive, the incidence of these other taxes tend to be less progressive, or indeed mildly regressive. One example is the GST, which makes up around 14.4% of federal taxation receipts.

The Treasurer’s statement that the top 10% of incomes from working age persons pay 50% of personal income tax is correct. This reflects the progressive nature of Australia’s personal income tax system, which is applied to a society that features significant income inequality.

The FactCheck seems reasonable and correct. It benchmarks the ABS household income and expenditure survey against the official ATO Taxation Statistics, and then confines to working age (18 to 65), to test the Treasurer’s claim.

There were about 12.8 million individuals filing tax returns in 2012-13. The ATO Statistics in its “100 persons” picture of Australian taxpayers, explains that the top three taxable incomes paid 27% of all net tax and the top nine taxable incomes paid 47% in total – pretty close to the working age estimate.

I agree with the author that the FactCheck demonstrates Australia’s progressive income tax system, which has long been considered fair.

Australia has a high tax-free threshold of $18,200 so many working age low earners pay very little income tax. In contrast, New Zealand taxes from the first dollar of income.

And many working age people pay no income tax simply because they are unable to find a job – as Australia has an adjusted 6% unemployment rate.

This article was originally published on The Conversation.