Australia has a census every five years. The census will now take place on Tuesday, August 10. The online census form will be available on the Census Department’s website from July 28. The address of this website is as follows: 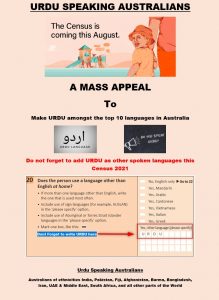 The census is explained in great detail on this website. By the way, if you spend a little time on the website, you can get all the information about the census.

All Australian citizens are obligated to participate in the census. As you know, in a developed country like Australia, all government departments’ plans are dependent on received census data. The government budget allocation, facilities given to the citizens, and for ethnic communities their languages, art, culture, and migration history are dependent on the data received through the census.

From 28 July, census forms will also be sent to the citizens on their permanent residential address, however, as we are living in the digital world, people should go online and fill out the census forms.

Participating in the census is very important for multicultural (ethnic) communities because it shows the correct number of your community, what country you belong to, what country you came to Australia from, how many people of your faith are Australians, and how many citizens of your community live in which states, cities and suburbs in Australia. How many people in Australia speak any language other than English at home? Participation is important not only for you but also for your identity, community, and your next generation.

Two special things are very important to us. All members of the Islamic community should make sure that they mention Islam as their religion so that the number of Muslims in Australia is officially and accurately part of the record that addresses the welfare and religious needs of Australian Muslims. Let the government be a part of its plan and facilities for Muslims’ religious requirements.

Similarly, another important thing is for those whose mother tongue is Urdu or Urdu is their language of communication and social network. The following is a very important question in this regard:

Question 20: Does the person use a language other than English at home?

You have to write the answer to this question is “Urdu”. Even if your mother tongue is not Urdu, it may be Punjabi, Seraiki, Gujarati, Sindhi, Balochi, Pashto, Marathi, Nepali, and son, yet your answer of the language spoken at home should be “URDU”. This will allow the Australian important government department the status of Urdu in Australia. The benefit of this will be that Urdu will also be used besides English in educational institutions, libraries, radio programs, government departments like Centrelink, immigration, customs, hospitals same as Arabic, Turkish, Hindi, and Chinese, etc.

In this regard, for those who use Urdu as the language for Islamic teachings and communication and their mother tongue is not Urdu, they need to respond “URDU” to Question No. 20.

Pakistanis and Indians are also running a campaign on WhatsApp in this regard where you can also be a part of this campaign and spread this message to others. If you would like to participate in this campaign in the WhatsApp group, here is the link:

Hopefully, the information I have provided will be helpful for you in participating in the census and make this goal successful. If you still want any details please feel free to contact me on 0479 143 628.