When his father decided to migrate to newly created Pakistan, in 1947, he was 11 years old. He was the eldest one among his 8 brothers & sisters. Since his childhood, he always felt the pain, suffering, and loss of human lives as he had witnessed the atrocious events, during the historic voyage with his parents and with the millions of people from India to Pakistan. His family, leaving the land of their ancestors, once and forever, migrated from India’s Ajmair to Sind, Pakistan, and permanently settled in Hyderabad, Sind (Pakistan). 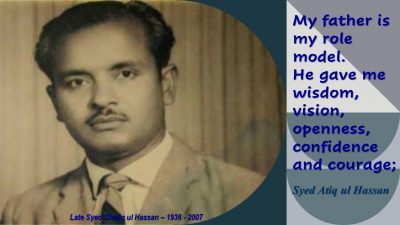 His father was an honest (then Indian) police officer who resumed his police job in Hyderabad, Sind but just after one year in a new country, in 1948, he retired from his long service. His aged father, who, perhaps, was sensing the ending moments of his life, got him married to a 16 years old girl from Karachi, in 1954, when he was only 18 years old. When his father died, in 1958, he already became a father of a newly born son. The burden of his own family, mother, 4 brothers, and 3 sisters, his commitments and responsibilities could not make him think of anything else except to live for others.

Utterly influenced by experiencing unforgettable adversities of (Indo-Pak) partition, family burden and to look after newly arrived relatives from India and then an environment where the entirely (new) nation was going through the process of building; he made his mission to help people and enormously involved himself in social and welfare work for the rehabilitation of people.

Full-time work and studying part-time, he graduated from Oriental College Hyderabad and chose to teach as his profession. His only hobby, after his routine family commitments, was his social work for the people of his city and especially for his town, Sarfraz Colony which was founded and named (associated with Sarfraz Shah Kilhora whose tomb was situated in that territory), by his father – Syed Wajid Ali. Later, he took his father’s mission and contributed all his potential to the development of the Sarfraz Colony. In the 1960s he made the land of the Colony legalized by the government through the late Zulfiqar Ali Bhutto who was one of the ministers in the government of former President Ayub Khan.

He was none other than my father – Syed Shafiq ul Hassan – who left us forever on Tuesday the 13th of March 2007. Yet, he left behind his wonderful memories as a role model in others, minds, and hearts, forever.

I believe, this article will not accommodate, if I would document, historical events of my father’s invaluable services, which he delivered, for the people indiscriminately. Nevertheless, the pieces of papers in the form of his awards, appreciation letters, certificates, and the huge album will make us remember his unforgettable social and welfare work.

In the early, 1970s, my father and mother – opened their primary school in Sarfraz Colony (Hyderabad) which later became two schools, one for boys and one for girls, each headed by each of them.

The key person behind making my father fulfill his commitments was my mother and his wife – Bilquees Begum. I want to say much about my father here, otherwise, I know, there is equally, much to say about my mother’s contributions. She, being the best partner of my father, on each moment and step helped and supported my father. They, together, admired the people as a great couple. My mother died in an accident in 1992 when she was only 49 years old.

I still remember a big banner outside my father’s school – ‘A Centre for Education and Etiquette’. Whenever anyone asked him, the same question, – ‘Education is obvious but why did you include Etiquette on the banner’? His answer was always the same – ‘Without Etiquette and Discipline your education has no meaning’.

Whenever family members complained to my father about his full-time engagement in social and welfare activities as he hardly gets a chance to take relax, his answer was a quote: “Allah said, ‘If you worship for me it is between you and me (the Lord) whether I (the Lord) accept your worship or not, as being your Lord is my judgment, but if you help your fellow human beings I (the Lord) owe you and reimburse your deeds’.

My parents’ honest, noble thoughts and sincere efforts made all their children good human beings. Today, most of my parents’ children including myself are associated with education. My two brothers and one sister are educationists in Pakistan. One brother & sister are in the United States, another sister is in Canada. I don’t want to speak about myself, but I feel whatever I am today is because of my parents’ good deeds.

Being the eldest among my brothers and sisters, I had the privilege to spend much time with him. He used to take me in his social, welfare, political meetings and functions.

I still remember the favorite national song “Yun Dee Haymen Azadi Kay Dunya Huyi Heran – Aay Qaid-e-Azam tera Ahsan Hay Ahsan” I used to sing with my brother in the annual function mainly organized by my father in our town. I never forget my father’s advice to me “if you get a chance to do work which brings your country name up never miss it”.

There are so many events going on in my mind but I would like to mention one here. I remember, in the mid-1970s, the former Prime Minister of Pakistan Zulfiqar Ali Bhutto visited Hyderabad to obtain the support of the people of Hyderabad – being a city of opposition to that political situation. He invited a few prominent people of Hyderabad. My father was among them. While everyone was introduced to Mr. Bhutto by the Commissioner of Hyderabad and before the Commissioner could introduce my father, Bhutto recognized him (as he was the master of ceremony at Bhutto’s function in 1964 during Bhutto visit to Sarfraz Colony to announce legalization of the land) and asked him what he was doing at that time. My father replied, ‘I am still a teacher’… Bhutto said to him ‘you should have made something by now, at least a license of a Rashan Depot (which was very popular in those days to open a shop for the supply of government-controlled food and it was good business to make money). My father very boldly replied, ‘Thank you very much for asking this but to take part in social & political work is my hobby, not my profession… my profession is teaching and I am happy in that.

When I decided to move to Australia, everyone in my family was happy as they were taking my move towards another bright future in various respects except my dad. He said to me that he did not understand why did I apply to immigrate to Australia in the first place as I had already completed my university degree, having an executive job in government at a young age, and all necessities of life with a happy family of then 2 children. His visionary words were ‘you may find another better job, more money, better educational perspectives for your children and better social security for your family but the thing you would lose over the time will be your culture, your family values, your parents, and your native identity.

When I used to do a radio program from FM100.9 in Sydney from 1997 to 2002, I used to take my father on air to present current affairs on the latest political situation in Pakistan. It was one of the best segments among our listeners. His political prediction was extraordinarily amazing. From the former President Ayub Khan to Zia ul Haq, he had received many awards on his social & welfare services from them. He was the founding member of many social associations, NGOs, and welfare societies. He was the founder of the Sarfraz Colony Welfare Society.

He was an excellent writer, poet, and remarkable speaker. I have seen him speaking in front of thousands of people in a public gathering with pin-drop silent when he talked on social issues and their solutions. All his poetry was about human issues, life, and his connection to God.

When I completed my book ‘Australia for Pakistan’ in 2003, the first name that came to my mind was my father to tribute the book to him. He was and will remain my role model not just because he was my father but because he was a great human being who made a difference in the lives of many.

In this materialistic world, people don’t value the simple and altruistic humane around them.  The fact of the matter is that we are losing them one by one.

The writer, Syed Atiq ul Hassan is a Sydney-based journalist, social worker, and an educationist