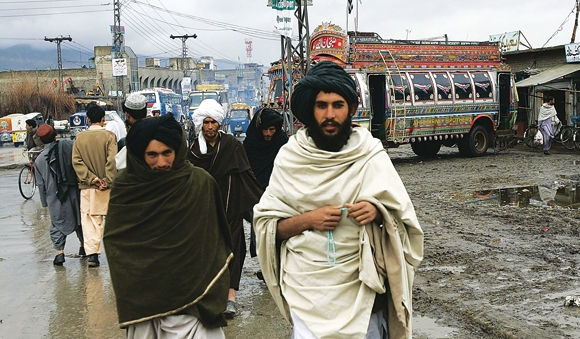 Founding member and former spokesperson of the Islamic Emirate of Afghanistan – known in popular media as the Taliban – as well as former Afghan ambassador to Pakistan, Mullah Abdul Salam Zaeef, said during a recent visit to South Africa, that the spate of suicide bombings against civilian targets in Afghanistan are the work of “intelligence” operatives, and not the forces of the Emirate.

Mullah Zaeef was in South Africa for the launch of CAGE Africa, the African chapter of CAGE UK. His statements have cast light on the true conditions in Afghanistan and the workings of the Taliban.

“There are more than 50 countries involved through their intelligence in Afghanistan,” he said. “They are doing these explosions among the people, and they are blaming others for that. They are then [perpetuating] this story in the media.”

“I heard from the intelligence chief in Afghanistan, he said we have a lot of people inside the Taliban,” he said. “There is a lot of conspiracy.”

As to the US claims that it wants to stabilise the region, Mullah Zaeef cites night raids on his house: “They came at midnight, banging on the door, exploding the door, in the centre of the city. All the people around woke up. They were entering the house and shooting, without reason. They are brutal. This is brutal behaviour. If they want peace, if they want stability, this is not the way.”
He says the US wants to destabilise the country in order to buy their way to political legitimacy in order to gain access to resources.

He said that to fight this, the Taliban did conduct suicide attacks – what they refer to as martyrdom operations – but not in civilian areas. “These bombings became the [policy] because the enemy became unable to reach face-to-face. The enemy have very sophisticated technology and the Taliban have none of this. This [disparity] is like the distance between the land and the sky.”

“This the final way to go, to explode yourself and the enemy. It is a very hard reaction to the enemy. Not everybody is able to do that. The Taliban is using this against enemy [targets], but not against the civilian people.”

Mullah Zaeef explained the term ‘Taliban’ as coined by the Western media as the arch-enemy of the US, and how it is incongruent with bombing civilians: “Taliban means student,” he said. “It means a student of Islamic education. In Islamic education we are studying to satisfy Allah, and when someone is working for Allah, I don’t think he will do wrong things. Maybe something by non-knowledge, or maybe something by mistake, but intentionally, I don’t think they are doing this.”

Rather, he suspects that foreign and local intelligence operatives were copying an old pattern set down by the Russians when they invaded and occupied Afghanistan in the 1980s: paying men to infiltrate the mujahideen and commit war crimes, in order to demonise the mujahideen.

A war of words and talking heads in Afghanistan

Since the US invasion and occupation of Afghanistan in 2001, the country’s media landscape, with the help of US funding, has seen the establishment of plethora of TV channels, radio stations and newspapers, which reinforces an aggressive neo-liberal agenda.

The main Afghan TV channel is Tolo TV, one of many channels owned by the Moby Group. Founded by the Afghan-Australian Mohseni brothers, and headquartered in Dubai, the group is funded in part with US “aid” money, and “boasts 21st Century Fox as a strategic minority shareholder”. Rupert Murdoch’s 21st Century Fox owns the ubiquitous 21st Century Fox film studio and the conservative Fox News television station.

With these influences, the Afghan media seems to have so far mimicked the worst of US media, staging live pre-election “debates” between political “contestants”, and even launching an Afghan version of ‘Idols’.

The Islamic Emirate of Afghanistan in an article entitled ‘Dancing to the master’s tune’ responded with strong criticism to both ‘Idols’ and what it says was a farcical election process. Referring to the concept of a taghut (false idol) in Islamic jurisprudence, the Emirate states: “We had two elections of the next Afghan Idol/Taghut in 2014. One of the singing and dancing variant, and one of the puppet and tyrant variant.”

Changing the narrative around the Taliban

It is this landscape that Mullah Zaeef describes as the driver of the West’s narrative around the ‘Taliban’. But despite the pro-US local media and the flares of mainstream international media, the organisation’s condemnations for suicide bomb attacks against civilians have found some air, and seem to be challenging this narrative.

The Emirate has also strongly denied accusations in January this year that it tied a suicide bomb to a 10 year-old girl: “We do not do this, especially to girls,” the statement said.

A leading member of the Emirate in a four-page letter written in July last year to Pakistani schoolgirl Malala Yousufzai expressed regret at her shooting by a gunman on a bus. Commander Adnan Rasheed denied Malala’s statements: “Please mind that Taliban or mujahideen are not against the education of any men or women or girls.”

(There are many who have pointed out that Malala Yousufzai’s rise to Nobel fame has been handled by an ambitious father and the Edelman PR firm. A report by The Independent, quotes artist Jonathan Yeo, who painted the portrait of Malala that hangs in the National Portrait Gallery, expressing concern: “I guess I was worried that she was probably a pawn in a bigger game and was being unduly influenced by the people around her,” he says.

Edelman PR is the world’s biggest PR firm. It specialises in “crisis PR” – and is known for such deceptive practices such as astroturfing: deliberately masking the sponsors of a message or organisation so that it looks like it originates from grassroots sources. Edelman managed the Wal-Mart campaign in this way. The firm provided crisis communications to Newscorp during the phone hacking scandal in which it was revealed that the now defunct News of the World hacked into, among others, the phones of the victims of 7/7.)

The current situation in Afghanistan

Pointedly, it is in the realm of education, and education of girls as well as boys, that Mullah Zaeef is currently active. “Today I have a good relationship with all people in Afghanistan,” he says. “I am independent – I am not working with the government, nor am I working with the Taliban. I am busy with the education system in Afghanistan. We built a university and a school for girls and boys. Alhamdulillah, we have more than 3000 students there and I am busy with them all the time.”

Mullah Zaeef himself was detained in Pakistan in 2001, and held for four years under torture, mostly at Guantanamo Bay in Cuba. He was released in 2005 and put under house arrest, on condition that he would not work with the Taliban or do any work against American interests, or the interests of US allies. In July 2010, he was removed from the UN’s “black list”. He has since authored two books, ‘My Life with the Taliban’ (Hurst; 2010) and ‘A Picture of Guantanamo’, which is due to be published in South Africa this year.

There are examples of a reality which is not in line with the media imagery of the Taliban such as in the treatment of captives. CAGE patron Yvonne Ridley has time and again emphasised the kindness displayed to her by its members after she was apprehended for being in Afghanistan in 2001, as a journalist without a visa. It was this experience that later led her to investigate and eventually embrace Islam three years later.

Long before the Geneva Conventions, the rules for warfare were set out in the Qu’ran. These rules acknowledge the tendency of humanity to go to war, but they emphasise, among other rules, that the captive is sheltered by his captivity. There are numerous examples from the Sunnah (practice) of the beloved Prophet Muhammad (peace be upon him) that illustrate his absolute insistence on mercy to captives – most common of which was the sharing of food: when the Jewish tribe of Bani Qurayzah were captured, the Prophet (peace be upon him) ordered dates to be regularly taken to them, with instructions to shelter them from the summer sun and to provide them with water to drink. Due to this gentle treatment, many prisoners embraced Islam. Prisoners were either set free with a promise never to fight again, or ransomed (this is the modern day equivalent of prisoner exchanges). Modern international law also allows for the freeing of a prisoner-of-war along the same lines.

Contrast this with the treatment suffered by prisoners in Guantanamo Bay and other detention and rendition sites around the world as documented by CAGE and other human rights organisations.

In the Quran, war is forbidden to impose religion. Rather it is decreed for those acting in self-defence: “To those against whom war is made, permission is given (to fight), because they are wronged; and verily, Allah is most powerful for their aid.” (Surah Al Hajj 22:39)

It is worth reading this year’s Eid statement from Mullah Omar, current leader of the Islamic Emirate of Afghanistan, an excerpt of which follows:

“We assure the world…as we assured them in the past that our struggles are aimed only at forming an independent Islamic government and obtaining independence of our country. We are not intending to interfere in the (internal) affairs of the region and the countries of the world, nor do we want to harm them. Similarly, we don’t tolerate their role to harm us and urge them to have reciprocal stance. I call on all Mujahideen in the frontier areas to protect their borders and maintain good relations with neighbouring countries on the basis of mutual respect.”

“There is no way for the US to stabilise the country, except to withdraw from Afghanistan,” says Mullah Zaeef, “to take out their troops and leave.”

(Karen Jayes of CAGE Africa provides insight into the Taliban, correcting many misconceptions the media has perpetuated over the years, by speaking to one of its founding members, Mullah Zaeef, who spoke at the recent launch of CAGE Africa in Johannesburg)