Over the weekend, Emirates airline unveiled a new Airbus A380 outfitted with 615 seats.

Economy class is getting even bigger after Emirates reconfigured its new Airbus A380-800 planes to hold the most seats ever for an airliner.

The airline’s first two-class Airbus A380, launched this week at the Dubai Airshow, has gained 130 more economy seats than its sister three-class plane, by cutting out first class and reducing the number of business class flatbed seats. It now boasts 557 economy seats and 58 business, taking the total to an impressive 615 passenger seats. There is also a business class lounge.

The Airbus 380 is already the world’s largest passenger plane. The new two-class A380 will hold a staggering 615 passengers in business and economy – but travellers in so-called cattle class will not lose any legroom inside Emirates’ overhauled cabin. 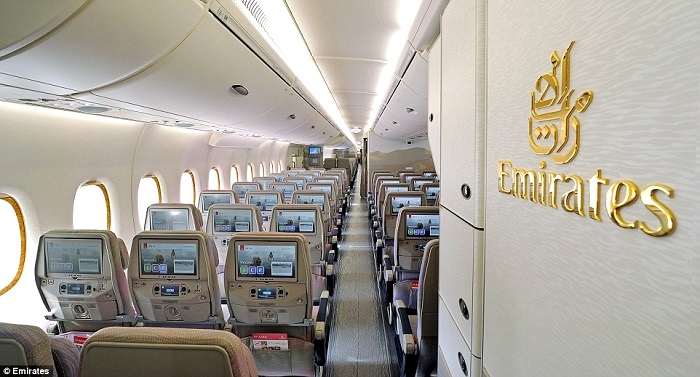 The luxury Gulf carrier has made room for 130 additional economy seats, or 13 rows with 10 seats in each, by scrapping the spacious first class cabin and trimming 18 flat-bed seats from business class.

The Dubai-based airline says each seat on the plane will feature one of the widest screens in the industry, at 13.3 inches. Its in-flight entertainment system offers access to more than 2,000 channels of films, tv shows, music and games.

Sheikh Ahmed bin Saeed Al Maktoum, Chairman and Chief Executive, Emirates Airline & Group, said: “The Dubai Airshow has grown to become a key event in the aviation and aerospace calendar and it is fitting that the aircraft on display this year embody the growth of Emirates as a global airline and as an enabler focusing on meeting the future demand for highly skilled professional airline pilots.”

There was a lot of hype on social media after the new Airbus was unveiled at the Dubai Air Show:

Say hello to the world’s first two-class @Airbus A380 at @DubaiAirshow #DAS15 pic.twitter.com/FyijKGi24i

Emirates plane removes first class to fit in the most seats ever: Emirates launches new Airbus A380, scrapping… https://t.co/UKKag2JhoW